Doom2 Map14 Homage, also known by its file name TWM01.wad, is a one-level PWAD by Tom Mustaine. Replacing MAP03: The Gantlet of Doom II, it was originally submitted to id Software for inclusion in the Master Levels for Doom II, but was rejected. Tom later released the level independently on his website.

TWM01.wad is heavily inspired by Doom II's MAP14: The Inmost Dens, which Mustaine refers to as his favorite map from the game. After visiting id's offices in person to submit the map, Shawn Green, who was in charge of quality assurance for the Master Levels project, played for a few minutes before leaving the room to fetch American McGee. McGee, the author of the original Inmost Dens, was apparently nonplussed with Mustaine's attempt at a tribute due to it being too similar to his own work, and declared, according to Mustaine, "...go make some of your own geometry! We aren't putting this in the Master Levels."

Mustaine returned home immediately and began work on what became Paradox, his successful contribution to the Master Levels. 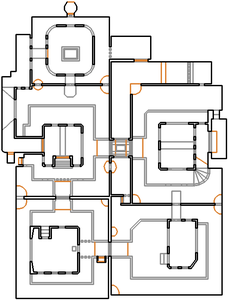 Map of Doom2 Map14 Homage
Letters in italics refer to marked spots on the map. Sector, thing, and linedef numbers in boldface are secrets which count toward the end-of-level tally.

The blue key is not present on medium skill. However, the level is still completable with 100% kills, items and secrets as it is possible to jump out of the south-western window of the room near the start, then jump from the nearby lift into the red key area.

* The vertex count without the effect of node building is 975.

Doom2 Map14 Homage is contained in a ZIP archive whose filename is TWM01.zip. Said ZIP archive has the following SHA-1 checksum:

The contents of TWM01.zip are as follows: 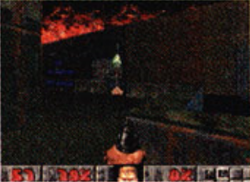 Rare scan of GamePro review. Compare to above.

Evidence has surfaced that TWM01 was at one point a candidate for inclusion in the version of Final Doom for the Sony PlayStation. A pre-launch review of the game in the September 1996 issue of GamePro magazine includes a screenshot of the level featuring the PlayStation port's colored lighting and fire sky. There is additionally circumstantial evidence on the final release version of the game disc that at least one and possibly two additional levels were originally planned for inclusion beyond the final 30, TWM01 presumably being one such map (and probably explaining why the game's jewel box inlay erroneously refers to the inclusion of "over 30" levels).

While released in 1996, the level was developed during and has a timestamp dating it to 1995, during the development of the Master Levels.