Start up screen for Doom 95. 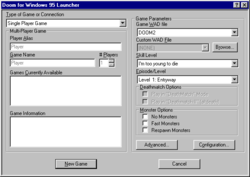 Screenshot of the main launcher application, showcasing several of the options that can be selected.

Doom95 is an official port of Doom to the Microsoft Windows operating system, and is included in many later releases of The Ultimate Doom, Doom II, and Final Doom. This port was developed by a team at Microsoft headed by Alex St. John, the creator of the DirectX specification. It was to serve as a flagship for the new technology, and was released on August 20, 1996.

It supports four screen resolutions (320x200, 320x240, 640x400 and 640x480), which can all be used either in a windowed or a fullscreen mode. The port also has a launcher to configure options for external PWADs, player controls and multiplayer settings. It has a slightly higher visplane limit than the original Doom, allowing more complicated maps. It also has cheat codes that are exclusive to it, such as the ability to kill all of the monsters in a level. Several additional command line parameters were also implemented. 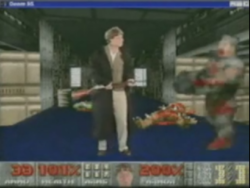 Work on a port of Doom to Windows began at Microsoft in mid-1994, then targeting Windows 3.11 and up via the new Win32s and WinG technologies, under the name of WinDoom. This initial work was done by a team started by Gabe Newell[1], who later co-founded Valve Software and developed Half-Life. While two public betas were released, this version of the code base was eventually shelved.

In late 1995, Doom was estimated to be installed on more computers worldwide than Microsoft's new operating system Windows 95, despite million-dollar advertising campaigns for the latter. The game's popularity prompted Bill Gates to briefly consider buying id Software, and led Microsoft to repurpose their Doom porting project into a promotion of the new operating system as a gaming platform. One related presentation, created to promote Windows 95 as part of Microsoft's Judgment Day event, had Bill Gates digitally superimposed into the game, killing zombies with a shotgun (rather strangely while holding it by the barrel with both hands) between segments of exposition. Microsoft stated that this release heralded the end of the reign of MS-DOS.

The following are known changes between vanilla Doom and Doom95:

How to run Doom95 on Windows Vista/7[edit]

To be able to run Doom95 on Windows Vista or 7, you need to obtain a file named DPLAY.DLL. This file can be found inside the Doom95 installation archive in the DIRECTX folder. An updated version of the file named DPLAYX.DLL can also be found in the WINDOWS\SYSTEM32 (or WINDOWS\SysWOW64) folder. A copy of this file can be renamed to DPLAY.DLL. After you have the file, it should be moved over to the location of the Doom95 executable (Doom95.exe). After this the game should launch normally.

Doom 95 will not launch at all on Windows 8 or 10 due to the removal of various files with DirectX, this can be fixed by downloading and installing a program named DXGL and copying DDRAW.DLL from the DXGL installation folder and placing it in the Doom95 folder. Then, copy the DPLAY.DLL file from the DirectX installation archive folder in the Doom95 folder and place it in the Doom95 folder. Lastly run the DXGL program, click "Add" and select the Doom95 executable, and set it to "Aspect corrected stretch" with 4:3 aspect ratio. This should scale the correct aspect ratio even on widescreen LCD monitors. The unofficial mouse patch does still work, however causes heavy delays and makes the game almost unplayable. The mouse patch executable must be launched in administrator mode.

A slightly different, and rarer, version is found on some, but not all, id Anthology discs. The main changes in this version are the bugs Sky never changes in Doom II is fixed and Crash when accessing Read This! is introduced. Unfortunately, there is no revision change between both versions so it is also called v3.0. It is 775,629 bytes in size, and has the following hashes: