The 2019 motion picture Doom: Annihilation contains a number of monster concepts, envisioned both through practical effects (use of makeup, and use of latex prostheses and full body suits) and through computer graphics.

The first encountered occurs in the first scene of the movie, when a volunteer test subject is transferred successfully through the teleporter to Phobos from the Delta Lab on Earth. While the subject initially appears intact, he soon begins to scream and to leak black fluid from his mouth and eyes. This is a direct reference to the backstory from the Doom instruction manual, where military volunteers suffered somewhat similar symptoms after entering the anomaly.

Bennett Stone later takes this same form when he is infected near the end of the movie. He displays complete loss of memory or capability for rational thought, and only attempts to kill Lieutenant Joan Dark regardless of her pleas. 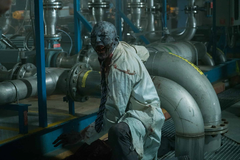 A number of zombie scientists attack the marine squadron shortly after they enter the Phobos compound's lower levels, and then pursue the group to the arboretum. Several marines and civilians are slaughtered by these creatures. They have grayish blue skin, are covered in blood, and are extremely fast moving unlike zombies of most tropes, able to make bounding leaps and pin down their victims. They generally attack by going for the throat, which they will tear out if their victim is incapacitated. They most resemble various zombie types from Doom 3, including the fat zombie, and the fast-moving Bernie, Sawyer, and morgue zombies.

Dr. Malcolm Betruger reveals that he has become a possessed human at the end of the film after Joan shoots him but fails to kill him. He states that he is "already dead," and reveals a cancerous demonic infestation that has taken hold in his abdomen. Unlike the other former humans, he seems to have been chosen purposefully to retain high neural functions, and he displays a cold calculating nature bent toward the sole goal of reopening the teleporter gates. He does not display any special physical attack capabilities, but he is able to launch a psychic wave of energy which is powerful enough to knock Joan backward several feet into the Hell portal.

Two types of imp occur in Doom: Annihilation. Both deliberately display influences derived from Doom's original imp, including charred skin, razor-sharp horns, and a characteristic gaping mouth.[1] Fire can be seen to coarse through the veins of both types of imp, added as a post-production effect.

After the marine squadron and the civilians they have found flee the base for the ship, the Phobos imp is shortly introduced and becomes the primary resistance faced for the remainder of the film. It has wet, tar-like skin with coloration from dark gray to black, has black deeply sunken eyes, and it is about the size of a human. It can leap onto its victims, after which it will attempt to suck out their soul through the victim's mouth, or it can summon a fireball, using a two-handed throwing motion which strongly resembles the animation of the imp's fireball attack in Doom 64 - this attack can kill an ordinary unarmored human in one hit, as it does this to Chaplain Glover. These imps are resistant to the marines' conventional firepower and can seemingly absorb whole magazines of bullets while barely flinching. They are however weak to plasma attacks such as the BFG 9000. These imps were depicted by human actors wearing full latex suits, three of which were created for the film.[2]

Another form of imp appears after Joan enters Hell, being summoned by the Lord of Hell to destroy her. These imps have a charred appearance with razor-sharp horn-like projections extruding from various parts of their body. They are thin and light and move fast, all at once, in a giant, twisting horde. These imps also share the red glowing eyes of Doom's original monster, unlike their Phobos counterparts. Joan presumably destroys the entire horde of Hell imps at once while "rocket" jumping by using the plasma grenades she found on the Phobos base - she enters the teleporter before the aftermath of her attack can be observed. Just before Joan tosses the grenades, the imp horde notably takes on a formation that calls back as an allusion to the original Doom cover art.

The Lord of Hell.

The Lord of Hell appears to Joan shortly after she emerges onto a basalt plain in Hell. About the stature of a baron of Hell, the Lord has the appearance of a conglomerated mass of black, charred bones with sharp edges, and has horns on the top of his head, which somewhat resembles a medieval knight's helmet. He is hollow at least from his chest up to his head, and fills this interior space with fire when speaking to Joan. He has long arms with three long, sharp fingers at the end. Like Dr. Betruger, he is able to launch psychic energy blasts. The Lord of Hell speaks in a strange dialect of the Sumerian language, and insists that the weakling humans undeservedly stole Earth from the demons, a wrong he intends to right. Joan vaporizes the Lord of Hell's form with a shot from the BFG9000 and then flees Hell through the gateway, though it is implied that he is not truly destroyed as the invasion continues on Earth afterward.