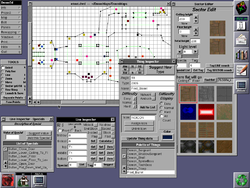 DoomEd running in NeXTSTEP.
This article is about the editor from id Software. For Geoff Allan's editor, see DoomEd 4.2.

DoomEd was the level editor used by id Software to create levels. It was written in Objective-C for the NeXTSTEP operating system. Contrary to editors created by the community, it did not work directly on WAD files, but only on a text format that was then compiled into a binary-format map by DoomBSP; both tools were meant to be used in tandem.

Although neither DoomEd nor its source code were released until April 21, 2015, a certain number of factoids were known beforehand, revealed by its developers, notably John Romero (who programmed it) and Michael Raymond-Judy.

The format used to store map data is made of three parts: a header, a line block, and a thing block. An empty line separates each section.

The header is merely the line "WorldServer version 4". It is unknown if previous versions of WorldServer corresponded to editors for earlier Id games, or for the alpha versions of Doom.

If the line is not double-sided, the second side's two lines of definitions are entirely omitted.

The thing block likewise begins with a counter of the form "things:<number>"; for example "things:138" for E1M1. Since things do not have to contain ancillary objects (vertexes, sides and sectors) in their own data, a thing definition uses a single line, of this form:

In a January 2015 interview, John Romero stated, "I recently gave the source to DoomEd to somebody to put on OSX, so that may happen."[1] The Mac OS X operating system was designed to be the successor of NeXTSTEP, and had many of the same functions and utilities that were also based on the C and Objective-C programming languages. As it would later transpire, it turned out that the person who he gave the source files to was Simon Howard (Fraggle), who would later place his then-incomplete port on GitHub.[2]

John himself later uploaded the source code to Dropbox and advertised its availability on the Doomworld Forums on April 21, 2015.[3] He then immediately followed up by releasing the original DWD source code files for Doom, The Ultimate Doom, and Doom II, including various backups and apparently unused maps.

In January 2020, an independently-developed Mac/Linux/BSD port of the DoomEd sources, called ‘ReDoomEd’, was released by Twilight Edge Software.[4]