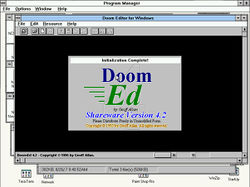 DoomEd is a shareware sector based easy access level editor for Windows 3.1, supporting Doom, Ultimate Doom, Doom II and to a degree Heretic, by Geoff Allan. It also features a built-in basic WAD editor and a node-builder.

DoomEd was one of the first Windows editors released and also had then one of the most automated UIs, making it the ideal choice for people new to Doom mapping. The last version was released in January of 1995 and the source was later released in mid 1997.

One of DoomEd's interesting features is that it allows the mapper to name each tag, making it easier to keep track than mere numbers. This information is stored in a TAGDESC lump following the rest of the map's lumps (after BLOCKMAP). In earlier versions of DoomEd, the TAGDESC lump was named PLATFORM; while the name changed the format did not and DoomEd 4.2 can load both.