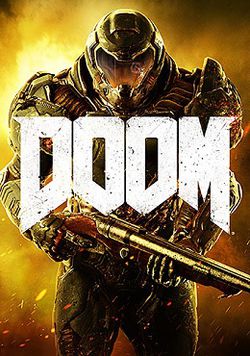 Doom (previously titled Doom 4) is a new installment in the Doom series released worldwide for Microsoft Windows, PlayStation 4, and Xbox One on May 13, 2016.[1] An additional port to the Nintendo Switch by developer Panic Button was released on November 10, 2017.[2] The game was added to the Google Stadia streaming service on August 18, 2020.[3] It is the third major game created by id Software and published by Bethesda Softworks since their acquisition by ZeniMax Media, following Rage and Doom 3: BFG Edition. Early planning and development began in August 2007, and continued into 2017 with the release of patches, downloadable content packs, and planned updates. The game features a story detailing the invasion of the UAC Mars Base by the forces of Hell.

The new Doom has been built on an engine which id Software has dubbed id Tech 6, a successor to their id Tech 5 engine. Its gameplay resembles the action-oriented tone of the classic Doom games much more than the horror style of Doom 3,[4] with a heavy emphasis on strong weapons, fast and agile player movement, and quickly paced encounters with large groups of foes. Graphically and architecturally, its advanced designs are aesthetically closer to Doom 3 in some regards, but with many deliberate nods to the original series, as is particularly seen in the enemy designs.

The Doom Slayer fights his way through the overrun facility and makes several excursions into Hell. He steals a magical blade called the Crucible, which he then uses to destroy the portal's power source in the former capital of his ancient allies, the Night Sentinels. He shortly comes across Pierce, who transforms into the monstrous Spider Mastermind, and kills her. Upon the Doom Slayer's return to Mars, Hayden confiscates the Crucible, which he plans to use to continue his research. Despite all that has happened and the continued risk of dealing with Hell, Hayden states that Earth is too desperate for energy to give up the use of Argent energy. To prevent the Doom Slayer from interfering, Hayden teleports him to an undisclosed location using the tethering device, saying that they will meet again.

The port to the Nintendo Switch, a custom Nvidia Tegra system, targets a 30 Hz frame rate at 720p resolution, has lower resolution textures and lower quality ambient occlusion, pares back the number of light sources in some scenes, uses quarter resolution for some post-process effects, and does not support screen-space reflections or setting a custom field of view.[5] However, most content for the game is still present, including the multiplayer mode, but excluding the SnapMap editor. 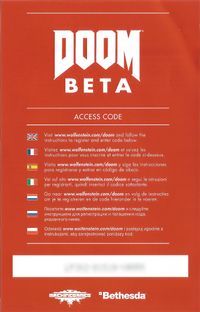 Doom, previously titled Doom 4, was confirmed to be in development by id Software as early as May 7th, 2008.[6] Very little information was given on the development process, and by 2013, Doom 4 was declared to be in "development hell" after reports of mismanagement. Those who worked on the early version of Doom 4 compared it to gritty, scripted military shooters such as Call of Duty.[7] Shortly after Doom 4 was declared to be in development hell, key members of id Software began to resign, including CEO Todd Hollenshead, John Carmack and many other development staff. Doom seemed as if it would never be released, until the multiplayer beta was announced.

The closed beta test began on March 31, 2016, and ran through April 3.[8] A beta open to all Steam, Xbox Live, and Playstation Network users followed shortly after, beginning on April 15 and lasting until April 18.[9] The full game was released on May 13, 2016, to glowing critical reception.[10]

The atmosphere and design of the game's Hell levels was heavily influenced by the dystopian surrealism of Polish painter Zdzisław Beksiński, most renowned for his later "fantastic period," which featured disturbing images of gloomy environments with detailed scenes of death, decay, landscapes filled with skeletons, deformed figures and deserts.[11]

Creative director Hugo Martin cited Frank Frazetta's dark fantasy painting Death Dealer, and others in its series, as an inspiration for the game's method of storytelling and characterization, with many details left in "shadow" so as to engage the player's imagination and to invite solutions to the plot's unanswered questions.[12]

Hell Followed is the second of the three pre-planned multiplayer downloadable content packs for the game, and was released by Bethesda simultaneously for PC, PlayStation 4, and Xbox One worldwide on October 27, 2016, [14] again accompanied by a 'Now Available' trailer.

Bloodfall is the third and final pre-planned multiplayer DLC pack, released by Bethesda simultaneously for PC, PlayStation 4, and Xbox One worldwide on December 14, 2016.[15]

The first update arrived on June 30, 2016.[16] It added Photo Mode for taking artistically composed screen shots, centered weapon placement as a gameplay option, and numerous fixes to bugs that were discovered after the game's release.

The third update returned conventional deathmatch to the game and added the new Private Matches feature along with Campaign and SnapMap updates, and was released on September 22, 2016.[18] Other additional improvements and optimizations were included.

Update 4, released on October 19, 2016, added a new single-player campaign mode known as Arcade Mode, a competitive experience where the player attempts to earn medals and make a new high score. Classic Doom modules were added for SnapMap, allowing maps similar to the original Knee-Deep in the Dead to be created. Two new multiplayer modes were added: Possession, a survival mode in which a team of marines fights a team of prowlers, with the prowler team growing whenever a marine dies, until eventually one man is left standing; and Bloodrush, a twist on standard free-for-all deathmatch in which the "Bloodrush meter" controls a player's ability to respawn, requiring it to be managed as it drains faster and faster as the match goes on.[19] Other additional improvements were included, especially for SnapMap.

The fifth update was released on December 7, 2016[20] and brings multiplayer bots to the Team Deathmatch and Deathmatch modes. Also included are a new multiplayer mode titled Infernal Run, the maximum rank is increased to Echelon 11 at which point the player unlocks the Praetor suit, and the update provides a large number of SnapMap additions and improvements.

The sixth update for Doom was released on July 19, 2017. It unlocks the three DLC packs for all owners of the game, includes a complete overhaul to multiplayer progression which replaces the hack module system with a multiplayer rune system and eliminates randomized unlocks in favor of challenge-based progression, includes improvements to the HUD and menus, features numerous bug fixes to multiplayer and SnapMap modes, and adds the ability to designate SnapMap levels as single-player only in order to disable the network limit on map size and complexity.[21][22]

A 4K Update patch was released on March 29, 2018, for the PlayStation 4 Pro and Xbox One X consoles which enables higher resolution rendering on these enhanced versions of the platforms.[23]