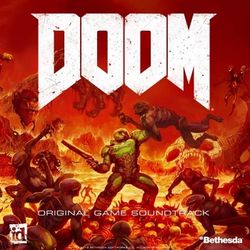 An official soundtrack publication for Doom (2016), entitled Doom (Original Game Soundtrack), was released by Bethesda on September 28, 2016. It features 31 tracks with a total play time of 128 minutes, and consists of three distinct chapters and a final track. Aside from arrangements of the original in-game music as it was composed by Mick Gordon, one track is remixed by Doom's audio designer Chad Mossholder, and one new track composed by Chris Hite, Doom's audio director. Additional sound design was created by Richard Devine.

The soundtrack is primarily composed of digitally synthesized progressive metal processed extensively with analog effects, variously described as falling within the sub-genres of post-industrial, dark synth-rock,[1] glitch music[2], and djent.[3] Dark ambience punctuates the rock, used in particular as backing to the narration sequences. The soundtrack is rife with allusions to the previous games of the Doom series, including material adapted from Bobby Prince's original Doom and Doom II soundtracks, and the main theme from Doom 3.

The interludes between each chapter and the final track feature narrations by the Lord of Hell of excerpts from the Doom Slayer's Testament. The tracks are an homage to ’70s and ’80s concept albums that tell the story of a protagonist.[5] Additionally, all of the titles begin with the letter "D".

Composer Mick Gordon described the design process of the soundtrack as beginning with "discarding the name 'DOOM'" in order to first define and focus on the elements that underlay its themes of Mars, Hell and demons, futuristic science fiction, and isolation in an alien environment. He stated that it was important to put the legacy of Doom on a pedestal, leading to the numerous allusions to the original soundtracks in his work, but without a "laser focus" that would hamper the development of a unique identity.[6]

While the synths were initially setup to avoid a heavy metal feel, fearing it would be perceived as "too corny," feedback in the wake of the QuakeCon 2015 presentation led Mick to layer in more guitars for a heavier sound, as fans believed this was necessary to reflect the game's roots.

As a fan of listenable '90s game soundtracks, Gordon was motivated to bring the music "front and center," using it as reward and motivation, with the tempo of music matched closely to gameplay footage sent to him by id Software during development. A smooth, flowing dynamic soundtrack was created to support the flow of the gameplay. Gordon also states that the work of Sonic Mayhem on the Quake II soundtrack was a strong influence on his work, and remains one of his favorite game soundtracks.[7]

As part of his unique process for creation of the soundtrack, Mick engineered a device he refers to as a "DOOM instrument," consisting of pure sine wave inputs directed into four separate, different chains of sound processing elements, including distortion pedals, bit crushers, fuzz boxes, analog phasers, tape echo, spring reverb, and a feedback loop along with several compressors and a pair of audio chain splitters, which were then mixed together. The design of this instrument was directly influenced by the plot of the game, as Mick wished to musically reflect the corrupting influence of Hell by dynamically imparting impurities onto the generated sounds in the way he envisioned Argent energy to work.[8]