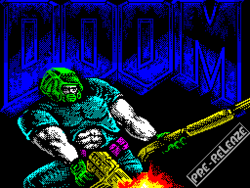 Doom for the ZX Spectrum was an unauthorized fan game version of Doom for the Sinclair ZX Spectrum home computer system running the TR-DOS operating system. It was developed by Spectrum programmers Sauron and RPSG of the Russian Digital Reality demo team. An early demo was included as a covertape feature in a 1997 issue of ZX Files Megatape 1. A more fleshed-out pre-release version 1.5 was also made available later. A final complete version of the game was never released, however.

The game engine consists of a Wolfenstein 3D-like raycasted point of view rendered in one of three screen modes. Monochrome mode places game play in a small monochrome window in the center of a colorful border using the ZX Spectrum's basic 256x192 attribute video mode. The two "fullscreen" modes utilize most of the available screen space for action in color, one with scanlines and the other without. Game content is entirely custom, though heavily inspired by the official Doom artwork. The game is controllable via the keyboard. Imps and zombies are included in the game's enemies, and the pistol and rocket launcher are among supported weapons.