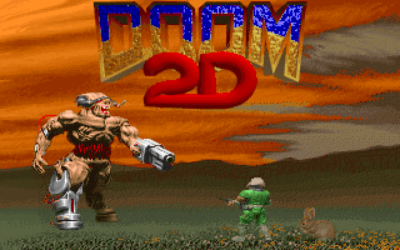 The title screen of Doom 2D.

Doom 2D is a fan-made DOS-based freeware side-scrolling video game released by Prikol Software on July 19, 1996. It is based upon Doom, similar to Doom 2D - Knee deep in the dead. Doom 2D is essentially the original Doom translated into a two-dimensional arcade or console-like shooter, comparable to the original Duke Nukem. The player resumes their role as Doomguy, who must do battle with various hell-spawn.

The story of Doom 2D is presumably the same as that of the original Doom, which contained very few story details in-game. Doom 2D has even less in-game plot developments than this, simplifying the already simple objectives found in Doom games.

Gameplay utilizes a simple and customizable set of keys to navigate a 2D environment and defeat and pass monsters. The game also offers splitscreen mode for two-player cooperative-play or deathmatch options, which can be played using different keys on a single keyboard.

Doom 2D includes all the monsters from Doom II (with exception of spectres and Wolfenstein SS) along with three new monsters. The creatures are seen from the side (as opposed to the front, as it is in Doom) due to the different perspective. All monsters are completely deaf (the players' shootings never wake up the monsters as long as the shots do not hit them). The game features foreground and background pictures both taken from original Doom and new ones (though many of them are unused). The sound effects in the game are also taken from the original Doom but are played in poor quality.

The game features 19 maps without secret levels, though they can be still used in custom levels. Authors claimed that they tired of making these maps, therefore so few maps are made. The map size is always of 100x100 dimensions.

Prikol Software eventually open sourced the game code and made it available for download at the website of Gajin Entertainment. Originally appearing entirely in Russian, eventually a partially-translated English version appeared and both are still available for free on the internet.

Doom 2D shares some similarities with Doom 2. It supports the WAD file format, although WAD files are used as a wrapper here. Doom 2D comes as DOOM2D.WAD. It also supports playback of demos, using the same lmp file format and there is also support for lumps, such as the PLAYPAL lump which contains the palette found in DOOM2D.WAD.

Similar to the actual DeHacked program, a custom editing tool with the name D2D DeHacker made by Stas'M exists. Available for the DOS version 1.30 only, Doom 2D DeHacker allows the user to edit weapons, monsters, and more.

Doom 2D: Forever is an open source OpenGL remake with many extra features, for Windows, Android (by DeaDDooMER) and (unofficial) Linux. The game includes single player, cooperative, deathmatch, and CTF multiplayer, as well as a powerful level editor.

Because of its advanced features, Doom 2D: Forever supports modifications and total conversions.

Doom 2D: Rembo is an port of the original game to Linux and was also unofficially ported to the PlayStation 1 in 2019.

Doom 2D: Vaya Con Dios is an port of the original game to Linux, made by K8Vavoom developer Ketmar Dark. It includes colored lighting and network support.