Doom 3: Mr. Smiley Head's Safari is a hacked modification of Doom released in 1995 by Impact Software.

The game is tangled together into the original DOOM.WAD itself, making it illegal to distribute, not only that, but it also contains copyrighted sounds and imagery referencing various pop cultures such as Power Rangers and Aliens, in addition to that all the non-finale maps are stolen and are modified to add huge and unnecessary amounts of enemies, most of the total 27 maps are simply from Heroes and Maximum Doom. 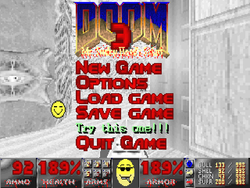 Main menu screen of Doom 3: Mr. Smiley Head's Safari. The player is under the effects of invulnerability. The mod also includes a custom status bar and new face graphics. 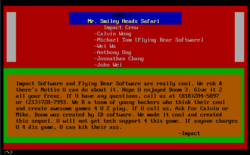 Alongside the usage of an illegal WAD, Mr. Smiley Head's Safari was originally released with a hardcoded custom version of the shareware release of DOOM.EXE version 1.2 utilizing a binary patch embedded in the executable, called DM3_EXV1.EXE.

At the loading sequence, the following text is displayed:

DM3_EXV1.EXE was used in conjunction with the supplied modified DOOM.WAD to pass off as its own unique game despite the multitude of illegal resources used and would not run without the combination of these two files. It carries a timestamp of June 4, 1995.

In 2006 a "legalized" version (called 6.0) appeared that wrote out the changes made in the original release to an equivalent DeHackEd patch and which removed the illegal executable, making this part of the release legal to distribute.

The game contains new sprites and graphics by Impact Software, made in Microsoft Paint with the lack of any shading and very simple things being drawn. There is no special editing in this besides maps, graphics and sounds, meaning that messages are still in their original form from Doom, and the automap names remain unchanged from their Doom counterparts as well.

Impact Software was a group of teenager hackers with this game being the only thing they've ever made, the credits in the game points out their names and professions as follows:

After beating the game there is an announcement for a sequel to be released in 1996; it was abandoned however and never finished.