A work-in-progress alpha version of Doom 3 called the "E3 Demo Alpha" was leaked to the Internet some time in November 2002.[1] A scripted sequence of play through this demo was used to show off the game at that year's E3 conference, and it was not intended to represent a playable product. As with most video games, this early version differed from the final retail release in many significant aspects.

Differences from release include, but are not limited to, the following:

Some of the weapons use models from Quake III Arena, and it is likely that the models themselves were meant as placeholders. The three levels included are early designs of maps that are included in the final game.

e3_1
Based on an early concept of the recycling plant. The Marine discovers the consequences of the Delta Labs experiment gone wrong.
e3_2
A mix of areas and designs from the EnPro facility and the CPU complex. The player must get past the commandos and replace the extraction canister. The door code is 924.
e3_3
An early version of the Alpha Labs with influences of sectors 1 and 3. It ends with the Hell knight eating the Marine's head. It is thought that this would have been changed into a boss battle for the end of Alpha Labs, but this concept was later moved into the Delta complex.
e3_intro
The introductory movie, which is actually a map. It depicts early versions of Mars City and Delta Labs.
empty
An empty box with a few lights

12 weapons are in the Alpha. The pistol, shotgun and machine gun closely resemble the final version while others are either from Quake 3 or crash the game. In this version, the pistol and machine gun use the same ammo, as in classic Doom. The weapons are:

On the Mars Research Facility, a hurried scientist walks between a couple of guards. He rushes to a communication console and tells a mysterious voice that a teleporter's stabilization field has a problem. The voice he's speaking with says that there is nothing to worry about. Moments later, the base shakes as power wildly fluctuates. The Delta teleporter fails and opens a gateway to Hell. Many lost souls come from the gateway. Two lost souls transform a Mars-Sec guard, one of which makes his skin turn green and the other makes his eyeballs explode. He mutates into a Z-Sec and runs amok. An imp is shown watching a corridor, then an image of a disemboweled man tied to an inverted cross appears as a pentagram starts glowing behind him.

After that, an unnamed marine comes from an elevator before he puts on his helmet. He goes around the area killing zombified personnel in a recycling station. Moments later, a Hell knight appears from a dark corridor. The marine hides and the Hell knight does not notice him. The marine goes to the upper levels of a communication center and is attacked by a pinky. After shooting it down, he spots some powerful zombie commandos. He kills a few of them and goes upstairs to Alpha Labs. Seeing the corpse of a janitor in a restroom, he walks inside only to see a Pinky emerge from the shadows. The Pinky then proceeds to feast on the janitor's corpse. He kills the Pinky and the now-zombified janitor. He then is attacked by many Imps and zombies.

As he is about to leave Alpha Labs, he realizes that the exit is locked. The marine turns around and sees the Hell knight from before is directly behind him. The Hell knight then crushes the marine and proceeds to speak in an unknown demonic language before decapitating him with its claws and eating his head. 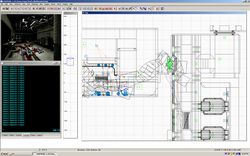 The bathroom scene in open in the Alpha editor
An early version of Doom 3 Radiant is included with the alpha. It can be accessed by typing editor in the console or via the command line.