The Doom 3 sub-series of games feature five different protagonists across them. In-game, the majority display identical features and capabilities, with the only notable differences being their appearances within cut scenes and in occasional third-person views from cameras and mirrors. 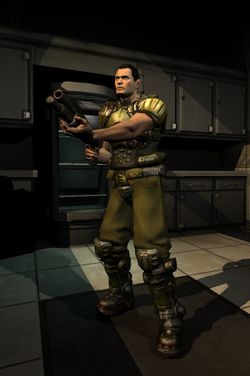 Doom 3 itself introduces a character known only as the "marine" (later called the "Doom marine" in Quake Champions, in contrast to the Doomguy of the classic Doom series). It is specified that the player has been sent to Mars as a replacement for another marine lost in the ongoing Delta Labs operations.

The Marine's appearance was inspired by and modeled after long-time id Software employee Kevin Cloud.[1] His facial features are not concealed since he does not wear a helmet (some sources suggest that it was originally intended for him to wear a helmet). His physique is also less powerful looking than the classic marine, although he is still relatively muscular. He has black hair and appears to be in his mid twenties to early thirties.

Unlike in the original series, the player can "talk" to various people. Most of them do not say much (other than that they are busy and the UAC base is a frightening place), but a few, such as Sergeant Kelly, give the player some briefing regarding his mission, especially after the forces of Hell invade the UAC base. Even on these "chatting" occasions, however, the player character is addressed simply as "Marine" and remains silent, either because most of the discussion is about his orders, or due to the silent protagonist narrative shared across the series. Although the Marine never truly speaks, he utters grunts of pain when injured or a scream when killed.

The Marine is depicted as being tough and fearless in the game's cut scenes. He rarely shows fear or panic, despite the increasingly horrific events and creatures he comes to witness, including several bizarre and disturbing psychic visions. He only shows a brief burst of anxiety (stepping back slightly and appearing to mouth a curse) when he first sees the towering cyberdemon.

The Doom 3 novel Worlds on Fire gives his name as John Kane, along with a backstory of military indiscretion similar to that of the original classic Doom marine.[2]

In the 2005 Doom movie, which is loosely based on Doom 3, the marine is named John Grimm and is portrayed by Karl Urban.

The Doom 3 marine, under the name of "Doom marine", appears in Quake Champions as an alternate skin for the Doom Slayer.

The Xbox version of Doom 3 includes a cooperative multiplayer mode which was available over Xbox Live. Promotional materials and cover art for the game accordingly feature a second character alongside the original protagonist, a brown-haired marine who features the same wavy hairline as the original protagonist of Doom, particularly as he is depicted in the episode end art of Thy Flesh Consumed and on the cover art for Doom II, alongside similar facial features. It is notable however that the character himself does not appear as such in-game; instead, both protagonists wear helmets similar to those possessed by members of the Bravo Team. 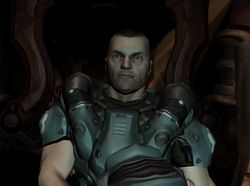 The Resurrection of Evil protagonist.

In the Doom 3 expansion pack Resurrection of Evil, the main character is a different marine, also without a name. This marine is a combat engineer, and thus is trained to operate a remote manipulation device known as the grabber. He has black shaved hair, wears blue armor, and appears to be somewhat older than the one in Doom 3, based on his heavily weathered facial features.

The game presents very little information on his background, only that he is part of Red Team, a Marine unit under the command of Dr. Elizabeth McNeil, sent to investigate the UAC facility in the aftermath of the demon invasion. While investigating the Martian ruins at Site 1, he finds and touches the Heart of Hell artifact, which releases a wave of energy that disintegrates most of his team and opens another portal to Hell underneath the UAC base.

The Marine in Resurrection of Evil appears to be more anti-hero in outlook than the Doom 3 protagonist, as he seems to enjoy using the Heart of Hell, which ends up killing almost everyone else at the base. He also shows brief bursts of anger throughout the game, especially toward the Hell Hunters and Maledict. 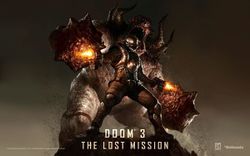 The Lost Mission marine brandishes weapons as the guardian towers behind him.

In The Lost Mission from Doom 3's BFG Edition, the player takes control of another unnamed Marine during the events of Doom 3, shortly after the massacre of Bravo Team in the EnPro facility. This Marine is wounded during the ambush, but manages to escape. He is eventually recruited by Dr. Richard Meyers of Exis Labs to destroy an unfinished teleporter in Hell to prevent the demons from using it to invade Earth. He succeeds and kills a Guardian-like monster before escaping back to Mars where he is eventually rescued by the crew of the Darkstar. The fact that he survived the events of Doom 3 may be an indication that there were other survivors and that the UAC covered up their survival.

The Lost Mission Marine's face is never shown and almost nothing about his personality is revealed. 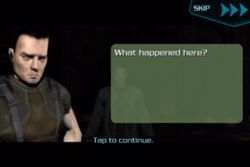 The Doom Resurrection protagonist during dialogue.

In Doom Resurrection, the player character is an unnamed marine, again a surviving member of Bravo Team (some elements of Doom Resurrection's plot were later recycled for The Lost Mission, explaining these similarities). Awakening after the ambush that killed most of his squad, he meets with and attempts to help Dr. Garrett, who presents him Sam, a flying droid capable of opening doors and hacking computers. Together with Sam, the survivor makes his way through the Mars facility, battling zombies and demons on his way through the base. His goal is to reach a port where a spaceship full of surviving members of the UAC facility is preparing to blast off. On his way, the marine meets a few survivors, collects valuable information through Sam, and visits Hell, where he closes the demon-spawning portals. Eventually, the marine is forced to leave Dr. Garrett behind, and Sam sacrifices itself to prop open a closing bulkhead door on the way to the dropship. Sam manages to give the marine the data previously collected, but the game's ending implies that the UAC engages in a cover-up of the details of the invasion.

Unlike the rest of the above protagonists, this marine does speak audibly to either himself or to other characters, foregoing the series' usual silent protagonist convention.