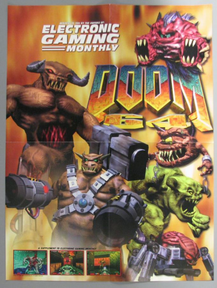 The physicality of the arachnotron is considerably altered: the mechanical body is much bigger, with the brain head ducked down inside the machine itself instead of sitting atop it and the legs being longer and bent at upwards-pointing acute angles. Instead of a single plasma gun, the Doom 64 arachnotrons possess two guns that fire out two blue plasma bolt shots simultaneously, but done so in spurts of five instead of a constant rate of fire, though it will continue firing as long as it can see the player. They first appear in MAP14: Eye of the Storm unless the player goes through MAP30: The Lair and MAP32: Hectic, which contain arachnotrons but chronologically come first.

The baron of Hell is given a red-orange color scheme, rather than green, which is instead used for the Hell knight. In Doom 64 barons can also injure and infight with Hell knights, and vice versa.

The cacodemon underwent a major design change, becoming beige brown, with a single yellow-green eye, and gaining two arms with broken chains attached, and a rather terrifying face. The body of the monster has animation frames (mostly in the way it swings its arms when in flight), whereas the original cacodemon floated in a motionless manner. It resembles Doom II's original pain elemental.

The cyberdemons in Doom 64 have not gone through many changes except that they have darker colored skin, are slightly stronger and much larger. The cyberdemon's rockets leave smoke trails and fly out much faster. The rockets also emerge from the launcher itself instead of the middle of the monster. While the Doom 64 cyberdemon has a similar death sequence animation compared to its PC counterpart, consisting of a full-body explosion, it is more elaborate in Doom 64, involving its form stricken with several separate explosions before the body essentially evaporates in a haze of fiery blood, replete with a shot of its skeletal frame vanishing into the clouds.

Cyberdemons are relatively rare throughout the game, appearing chiefly in the secret levels or later in the game. Notably, MAP24: No Escape has three cyberdemons on Watch Me Die skill level.

The demon is larger and has a more menacing, muscular appearance, with black horns, smaller red eyes, and accentuated teeth and claws.

Zombiemen have a very similar appearance to the one they had in vanilla Doom, but their rifles look more like shotguns and their suits are colored blue-grey. They first appear in MAP01: Staging Area. Also, like in PlayStation Doom, their gunshots deal somewhat more damage than in previous versions (up to 24 damage).

The shotgun guy makes an appearance in Doom 64, but interestingly enough, it uses the same sprite as the Zombieman but with a slightly different palette applied, making both monsters almost impossible to differentiate in the game's darkness. This makes anticipating the attack that will come from a given zombie difficult. They first appear in MAP01: Staging Area.

Though overall similar to the standard Hell knight, the variant found in Doom 64 is less pale in color, and more closely resembles Doom's baron of Hell. They fire green projectiles like their PC equivalents.

One quirk of the game, carried over from the PSX port, is that they can deal and receive missile damage to and from barons of Hell, so infighting between the two monsters is possible.

A more powerful variant known as the nightmare imp is also one of the new monsters in the game.

This version of the imp also features discrete animations for melee attacks versus ranged attacks, similar to the revenant in other games. This means that unlike other versions of the game, the imp will not throw a fireball if his melee attack misses the player (since in other versions, the attack type - fireball or melee - is determined by the victim's proximity at the end of the attack animation).

The Doom 64 variation of the lost soul looks somewhat different, with slight translucency, and fire only on the top of its skull. It is also much more aggressive than its PC counterpart, with faster and more repeated attacks. It is also physically weaker than its PC counterpart and can be felled with a single shotgun blast. The combination of strong attack and low hit points makes it a "glass cannon" enemy.

When lost souls are fired by the Doom 64 pain elemental but do not fit in their current location, they explode with the same amount of force as a rocket, making the spawn blocking strategy used to marginalize vanilla pain elementals impossible. The amount of damage from two failed lost soul spawns at close range is enough to potentially kill a fully healed and armored player.

While the function of the mancubus in Doom 64 is unchanged, its appearance is greatly altered. It has less fat and a more bear-like face, is significantly taller, and wears a metal body harness with a fuel pack on the back. Its fireballs are smaller and appear more like fiery brimstone.

This type of mancubus appears on the cover of an issue of Nintendo Power featuring a spread of Doom 64, including a two-page poster that features it in conjunction with other demons, as featured above.

The pain elemental appears with an altered design. It is colored dark pink, has a single green eye, and in place of its arms are two mouths, such that it can now spawn two lost souls at the same time. Its back has a large horse-like mane. It gives off a low sinister laugh when it has sighted the player.

Unlike other versions of the game, standing at point-blank range to prevent the pain elemental from spawning lost souls is not a viable option; each lost soul that fails to materialize will cause a significant amount of damage, comparable to an exploding barrel - getting hit by both is roughly the same as being hit by a rocket. This makes the pain elemental very effective at monster infighting as well. This extends to the lost souls it spawns at death as well.

Like in the preceding PlayStation Doom, spectres do not "shimmer", but are instead rendered using translucency. This is because the partial invisibility effect is difficult to reproduce in hardware renderers like the one used on the Nintendo 64 console.

Inactive spectres are initially rendered as opaque demons with a green tint (inspired by the PlayStation's nightmare spectre), becoming translucent upon detecting the player. Upon death, they revert to an opaque state again. Spectres also appear in the Doom 64 Cast of Characters sequence at the end of the game, unlike the spectre in the Doom II cast sequence.

The Mother Demon, also internally known as the Resurrector, is the final boss of the game and appears only on MAP28: The Absolution. She is an entity stated to have vast rejuvenation powers and is responsible for resurrecting all of the monsters fought during the game and giving them their new more powerful forms. The Mother Demon must be slain in order to avert a possible new demonic invasion.

The nightmare imp is a translucent blue and purple variant of the imp which moves twice as fast and fires dark purple fireballs which also move at twice the speed. While no more powerful than the ordinary imp, their attacks are fiendishly difficult to dodge. Imps and nightmare imps are different species and are capable of infighting.

Marines appear only on the title map and are a primitive form of bot which will, if programmed correctly in the map, fight with other monsters.