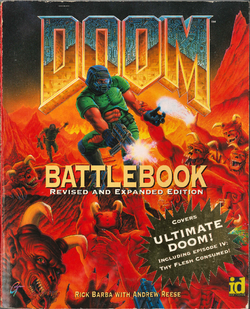 Front cover of the revised edition.

Doom Battlebook is a book written by Rick Barba and published in 1994 by Prima Publishing. The book is a 201 page strategy guide and covers the three episodes of the Registered version of Doom.

A revised edition with 274 pages was later published in September, 1995, as Doom Battlebook: Revised and Expanded Edition, covering episode 4, Thy Flesh Consumed. This version is credited to Rick Barba and Andrew Reese; the latter presumably wrote the new chapter.

The book makes heavy use of (black and white) screenshots throughout all chapters, which makes it a very visual guide. Most levels have around 6 pages to them, including annotated maps and extensive walkthroughs with screenshots of major landmarks. Larger levels sometimes stretch to 8-10 pages.