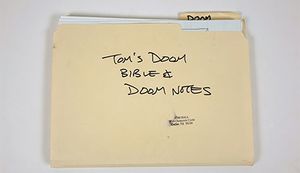 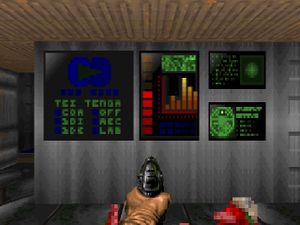 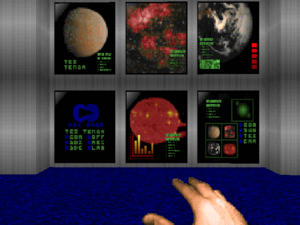 Tei Tenga is visible on the monitor at upper left.

One of the prominent features of the Doom Bible is the extensive story, calling for in-game cinematics and cutscenes. The exact opposite is true for the final release of Doom. It is known that John Carmack felt that the emphasis on story slowed down the game more than it helped it. This disagreement eventually led to Tom Hall's departure from id Software before the game's release.

The game originally took place on a planet or moon called Tei Tenga and featured multiple playable characters, with plans for six episodes and a follow-up commercial release.

The Doom alphas feature much more, albeit progressively less with each successive version, of the Doom Bible's content than what made it into the final game. Some of the locations that are mentioned in the Doom Bible are fully realized in Doom 0.4. Office chairs, a rifle sprite that is not seen in the final release, and a bayonet sprite and animation can be found. There are also several Doom marine models seen in a lounge-like area playing a game of cards. This was mentioned in the Doom Bible as the setting for the game's opening cinematic.

The film Aliens, released in 1986, is frequently cited by Hall in the document as a point of reference and inspiration. Star Wars is also mentioned several times, and is known to have influenced the game's texture art direction.

Some sections of the Doom Bible are only skeletal or are completely empty, while others contain substantial information, some of which continued to inform the design of the game all the way to its release. The below information covers the content of substantially filled-out chapters.

The first chapter details 13 different planned command-line parameters, however none of these were ever implemented as-is; some have close analogues in the released versions of the game.

Chapter 5 details various ways of ending a game, including "user abort" (deliberately exiting), death, and victory. The first option was to kill the player and then return to the menus. When the player died, a third-person camera view was suggested to be displayed - this was never implemented, however. The "win" condition suggests that a slideshow ending with text similar to those that occurred in Wolfenstein 3D would be employed at the end of each episode. 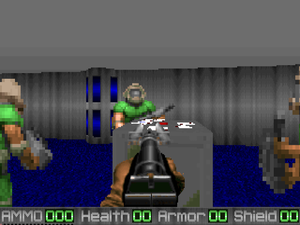 The four characters are engaged in a card game at the beginning of the first level.

One named non-playable character of note is Buddy Dacote, a fit and powerful warrior described as "popular and courageous" who got sent to Tei Tenga for showing up a superior officer. He acts as a security advisor. He wears a hat that says "BEOS", which is short for "Butt End of Space," an unofficial nickname for the Tei Tenga outpost. He was to disappear during the opening cinematic of the game where the player characters are engaged in a card game. He would then later reappear in the first episode's ending, only to be quickly torn in half by a demon. As such, his name is stated to be "insider" code for "Dies at the conclusion of this episode". It is notable that in the released game, the Doomguy himself seems to die at the end of the first episode, making this a surviving plot device.

Further possible NPC names are given as Roland Trague, Warren Apisa, Taradina Cassatt, Melanie "Butch" Bucelli, and Janella Sabando, but these names have no details associated with them.

The playable characters would have included the following:

Described as tall, muscular, and attractive, but with "too-intense" eyes. She was assigned to the Tei Tenga outpost after losing a bet which meant she had to pull an existing application to a better post. Her speed was to be fast, and she would be proficient in use of the pistol. Her wound recovery would be poor due to her tendency to push herself through the pain, and she would be inefficient with the bayonet.

Described as a black balding man with thick eyebrows and a missing fingertip. He was the former head of security at the Advanced Weapons Research Labs, but became frustrated with the UAAF bureaucracy, and deliberately committed an act of insubordination. He was, however, able to request a post on Tei Tenga, which allowed him to escape this annoyance. He was to be proficient with bullet-based weapons (which would have included the shotgun), and was to have high damage capacity. His speed, however, was to be average, and his performance with missile weapons was to be poor.

Described as an overweight Greek-Spaniard with a swarthy and unkempt appearance - his hair was said to "explode" from his head. He is a low-ranking military grunt with no ambition for more than a chance to take out his aggression using the UAAF's high-powered weaponry. He was to be a "jack of all trades", good with all weapons and having high endurance. His downside was to be slow movement.

Described as red-haired, trim, and "stout but gorgeous," with a "bewitching dimpled smile." Her father was a UAAF sergeant, giving her a strong sense of duty. She was a medalist in unarmed combat, and took the Tei Tenga post simply to have variety of experience. She was to be faster than average, with high evasion, and could inflict high damage with the bayonet. However, she was to have low hit points. 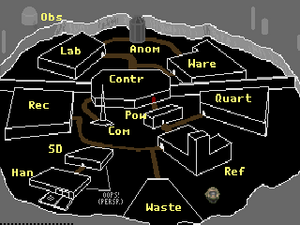 This placeholder intermission map from the Doom v0.5 alpha release is based on the Doom Bible's description of Episode 1. Tom Hall's maps were designed to fit the shapes of the buildings on this map. 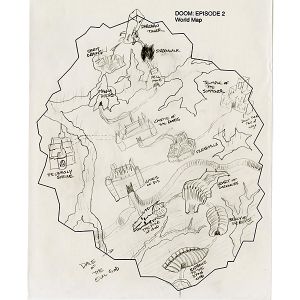 Tom Hall's sketch of a map for episode 2. Elements of this design were retained for use with the eventual episode 3.

Chapter 7 begins detailing the episodes of the game. The game was to feature six episodes, much like Wolfenstein 3D before it. As in the released game, the first episode was to be made available as shareware, with the rest only being available to registered users.

The players are interrupted during a game of cards in a hangar bay, and Buddy Dacote disappears after strange occurrences begin to sweep through the Darkside base. At the end of the episode, you learn you have been fighting against demons and are now trapped in Hell. Like the eventual Knee-Deep in the Dead, the enemies to occur in this episode would include demon-possessed humans, imps (then called "Demon Troops"), demons (then called "Demon Sargeants"), and the Bruiser Brothers, the twin barons of Hell which occur at the end of the episode. Also to be included were flying imps, the description of which is quite similar to the gargoyle enemy which eventually appeared in Heretic and Doom Eternal, and for which there is no analogue in any of the released versions of Doom, nor any known unreleased resources.

The other remaining episodes are only sparsely detailed, with a basic story. There are no plans for the levels.

As with Wolfenstein 3D's follow-up, Spear of Destiny, id Software already intended to develop a commercial retail game as a sequel before the first game was completed. The team would reunite for a vacation, but would find that the General Demon has awakened powerful ancient demons in order to attack the Earth. The entire world has to fight back against the demons while the team works their way to the General Demon's palace. Again, he cannot be attacked directly, and throws the player into a cage. However, the player is able to use the probjectile on a nearby machine. The resulting damage causes the ancients and the General to be sucked into it and rendered into giblets.

The following weapons were planned. It was intended that players would change color using palette translations when using different weapons, but this was never implemented.

The following items are described:

Virtually all of the items described in the Doom Bible have pickup sprites in the Doom v0.3 IWAD, though most go unused. All of the sprites are also still in the slightly different palette which was used by Doom v0.2, meaning that those which do appear look incorrect. Additionally, the behavior of sprite offsets changed between the two versions of Doom, making those pickup items which are present render deep inside the floor. The following screenshots were all taken with a source port in order to avoid these various issues. Items are all named from left to right, assuming that they occur in the same order in the IWAD as they are named in the Doom Bible, which seems to be universally true for all the sprites which are 100% identifiable.

Chapter 15 contains a basic blurb and the extended press release text which was eventually released on Usenet and elsewhere by Jay Wilbur. 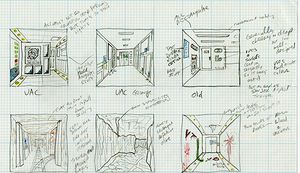 Graphic design by Tom Hall of the various themes spelled out in the Doom Bible. Some of these designs still exist as textures in the final game.

Some bits and pieces from the Doom Bible still show up in various places in Doom itself: 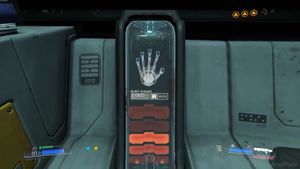 In other games and media[edit]

An abridged version of the Doom Bible was released by John Romero on Doomworld in 1998 as part of the 5 Years of Doom feature. Initially thought to be relatively complete, its less-than-comprehensive nature was later revealed when the original documents, housed in a manila folder, were briefly exhibited at a Texas museum in 2019. Several sketches never before seen outside of id Software were revealed.

The same form of the Doom Bible hosted on Doomworld is also available as one of the bonus items offered for download along with The Ultimate Doom on GOG.com.