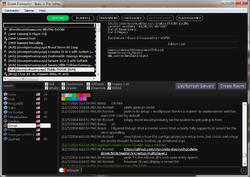 Doom Connector was a free lobby-based service developed by Pascal "CodeImp" vd Heiden, which was later run by Zorcher, and finally by Vindict6. Doom Connector was a lobby-based client that allowed users to easily play Doom online with several popular multiplayer ports, such as ZDoom, Skulltag, ZDaemon, Doom Legacy, SRB2, and GZDoom.

This service allowed players to see all public servers from Doom master servers, but also allowed creation of private peer-to-peer games. The support for each source port was built as a plug-in, which allowed flexible support for all the features each source port has. Doom Connector provided very comprehensive features such as:

This product was developed by Pascal vd Heiden in 2001, and was continued by Zorcher in 2008. On June 25th, 2014, Doom Connector went offline. On March 22, 2016, Doom Connector was reopened by Vindict6 and a new administrative team. As of 2021, the service is once again defunct. 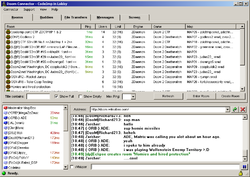 Development started in July 6th 2001 as "Doom Legacy Connector". At that time, Doom Legacy needed a replacement for its master server. The software was announced finished and stable somewhere at the end of September 2001 and opened its doors on October 9th 2001. The service was hosted by Joen Joensen and maintained by Pascal vd Heiden and several moderators from the Doom Legacy community.

Not long after its release, the authors and users of other source ports requested support implementation for their ports as well. The software was then rebuilt to include support for the above mentioned source ports and was named "Doom Connector 2", since it was the second major version and no longer specific to Doom Legacy.

More than a year later, the entire software was rebuilt again to better support the different source ports and to provide more features. The service also needed more professional administrative features to maintain the system and community. This version, released at February 28th 2003, was named "Doom Connector 3".

At February 14th 2004, the service went down because Joen Joensen was unable to host this service any longer. It didn't take long for MancuNET to bring this service back with a complete new management. At March 3th 2004, Doom Connector 3 was re-opened by Mancubus II with several moderators from all over the Doom multiplayer scene.

Pascal vd Heiden decided to try going for a total new build for Doom Connector, which was known for a while as "Doom Connector 4". Unfortunately it wasn't released, even after 3 months of work using Microsoft .NET to provide Doom Connector better and newer features.

A few months later, Pascal vd Heiden retired from administration because other work required his attention. He passed control over to Dagger.

After 4 years, The Doom Connector service was discontinued on May 30, 2005, and the source code of the product was given to Brad "Carnevil" Carney, author of the Skulltag source port. Skulltag Online was started shortly thereafter, as well as a branch of the software called Player Connector which was maintained by Zorcher. These two services served as replacements for Doom Connector for several years. In 2008, the Doom Connector service was temporarily reestablished. By 2010, the user base had seen a substantial decline compared to its peak.

On June 25th, 2014, the Doom Connector service went offline. On March 22, 2016, Vindict6 reopened the service to Zandronum, ZDoom, and GZDoom users. Several improvements were made on the client including improved netcode, an updated UI, chat color insertion, IRC integration, and numerous others.

As of 2021, the service has once again gone defunct.