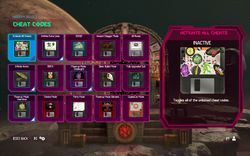 Unlike previous games, the cheat codes of Doom Eternal are collectible items that must be discovered before they become usable. They appear as floppy disks with designs appropriate to their corresponding cheat.

To activate an unlocked code, choose the Mission Select option from the main menu and pick the desired codes from the "Cheat Codes" menu. Cheat codes can only be used on previously cleared missions and will hide Slayer Keys when active, but any other collectibles found with cheat codes active will still count towards game progression. While a cheat code is active, objects that would conflict with the cheat's function cannot be used (for example, runestones cannot be interacted with while the All Runes cheat is in effect).

Collecting every cheat code will unlock the ability to play the original Doom on the Slayer's computer in the Fortress of Doom. It will also complete the "Reforged the Genie Lamp" achievement and tick off its corresponding milestone.

Some cheat codes are only available in the main campaign due to their restricted applicability. The cheat selection menus for The Ancient Gods, Part One and Part Two do not include "All Runes", "IDKFA", "Fully Upgraded Suit", or "Berserk".

Cheats are not available when playing Master Levels or in Horde Mode.