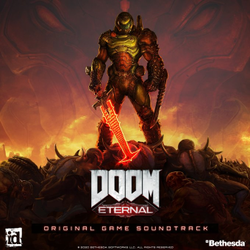 The soundtrack of Doom Eternal was composed by Mick Gordon. It was designed to be a continuation of the soundtrack to the previous game, but also a sort of ancient, alien heavy metal album. Some songs feature lyrics in fictional languages (such as "kar en tuk", Argenta tongue for "rip and tear"), and a choir was gathered for the occasion, with an open call to heavy metal vocalists. The choir was recorded in March 2019.[1] Additional lyrics were performed by oktavist Eric Hollaway.[2]

Note that this article does not include information for music added in the downloadable content episodes, The Ancient Gods, Part 1 or Part 2. These should be covered in their own articles.

The official original game soundtrack for Doom Eternal was released to Collector's Edition owners on April 18, 2020, and was originally planned to follow with streaming and download releases in the future, but these have still never materialized as of June 2022.[3] It features 59 tracks of remixed music from the game composed and arranged by Mick Gordon and id Software's Chad Mossholder with a total run time of 4 hours, 13 minutes and 40 seconds.

Other music not included in the official sound track release is used in Doom Eternal (not including the DLC) and in related media.