The Doom Slayer examines a toy after finding it. 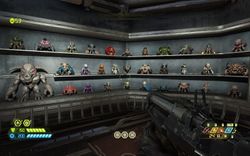 Toys are secret items that occur in Doom Eternal, replacing the Doomguy collectibles from Doom (2016). There are 31 toys in total; two or three toys appear in most levels of the main campaign, while the Icon of Sin's toy is unlocked automatically after collecting all the other toys.

Toys take the form of small, cartoonish figurines that each represent a species of demon encountered in the campaign, as well as one toy for the Doom Slayer. Finding a toy adds it to a shelf in the Slayer's private room aboard the Fortress of Doom; the player can then interact with these figurines to bring up a viewable model of the character they represent. Upon finding most toys the Slayer will look at it briefly before putting it away; however, on finding his own figurine the Slayer will raise the toy's left arm before extending his Doomblade.

Finding all the albums in a single save slot will complete the "Playset Sold Separately" achievement and tick off its corresponding milestone.