Known as Doom II X-Treme, Doom2X-treme, “Doom 2 Extreme”, or simply D2X, is a 32-level total conversion for Doom II released on August 12, 1996 by Chuck Lai and the third entry in Lai's X-series (after Doom2X and Ultra Doom2X). While weapon and monster tweaks were done by him, employing an extensive DeHackEd patch and updated graphics, the 32 levels were created by others with some being edits of official id Software and TeamTNT levels. X-Treme gives a larger HP pool for both monsters and the player, while boosting weapons to a whole new level. For example, the automatic shotgun's fire rate is much faster than the default chaingun.

On August 14th, 2021, Charles Lai played a complete playthrough of Doom2X-treme on Twitch which has been since posted to his YouTube.

Starting from Doom2X, Chuck Lai employed an extensive DeHacked patch that significantly changes the behavior of both weapons and monsters. Similar to The Sky May Be, this was called an "engine" named Doom2X. To further give off the impression of an actual engine, at the loading sequence, the following text is displayed:

The ENDOOM screen has the following additional text:

The original release of Doom II X-Treme relied on a hardcoded (and illegal) version of DOOM2.EXE with the DeHacked patch built in, called D2XTREME.EXE. This was in line with its predecessor Ultra Doom2X which shipped an illegal executable called UD2X.EXE (released May 19, 1996) and ran version 1.3 of the "engine". In the early 2000's an updated release of Doom II X-Treme was made that supplied the DeHacked patch as a separate file and which removed the illegal executable. 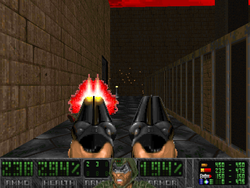 This WAD features three built-in demos. All require Doom II v1.9 to view them. The demo levels are: