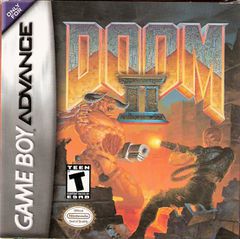 Doom II for the Game Boy Advance was developed by Torus Games of Australia and published by Activision. It was released on October 23, 2002. This version of the game does not run on a port of the original Doom engine, but instead runs on a custom engine shared with several other Game Boy Advance first-person shooter games called the Southpaw Engine.

In terms of content, the game is nearly identical to the PC version, with only very minor changes. However, conversion of the game play and rendering functions to a different engine resulted in a number of visual and mechanical inconsistencies from the original game; some are purely cosmetic, but others can have a significant—and sometimes detrimental—effect on game play.

Differences from Doom for GBA[edit] 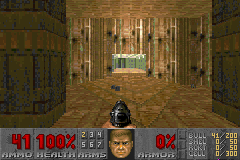 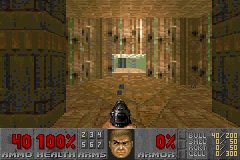 Since the original Doom engine was not used for this game, all content and mechanics had to be converted to the Southpaw Engine. Despite this, some of the mechanics and assets used are closer to the original PC version than they were in Doom for GBA.

While its predecessor carries over double-width pixel rendering from the Jaguar (equivalent to low detail mode in the DOS version), Doom II for GBA only uses double-width pixels on geometry edges, ceilings and floor textures. As a result, player weapon sprites and map screen rendering in particular appear significantly more detailed. When selecting Nightmare! skill level the game does render wall textures with double-width pixels as well, likely in order to lessen performance drops due to larger enemy numbers. To conserve performance, the engine always employs an aggressive mip-mapping technique on textures. Compared to Doom for GBA, this solution results in less faraway aliasing at the cost of a strong loss in texture detail. The option to toggle between dynamic and static lighting is not included.

All maps and monsters are present, including the Wolfenstein 3D secret maps and Wolfenstein SS enemy. All items are also present, including the previously absent light amplification visor and the blur artifact. The demon has its original death sound, health potions and armor bonuses give only 1% versus 2%, and the original PC status bar is used, albeit rescaled for the 240x160 resolution. The fonts used in the game are generally much more faithful to the original PC version than the ones used in Doom for GBA. Screen effects such as getting or picking up invulnerability or radiation suit powerups function much closer to the PC original than they do in the predecessor; furthermore, the game uses equivalent screen effects to the PC version when taking damage from damaging floors, whereas the predecessor lacked them altogether in this case. Weapon sway is also implemented in a different fashion. Monster corpses also disappear differently in that they will “flash” out of existence instead of simply vanishing. Interestingly, while the actual sprites for monster corpses disappear, the actual locations of said corpses seem to remain intact as an arch-vile still remains capable of resurrecting dead monsters by traveling to the exact spot where a monster has died and resurrecting it (complete with the resurrection itself playing out just like in the PC version).

Control in Doom II for GBA feels somewhat different from its predecessor; strafing and moving back are slower in particular. Unlike Doom, the game offers user-controllable turn sensitivity.

The most significant improvement over the first game lies perhaps in the audio department; while Doom for GBA appears to play hardcoded samples straight from the two Direct Sound channels, Doom II for GBA features a software audio mixer that allows for more than two sound effects to play at once, along with sound effect and music volume controls. Music quality and faithfulness to the original General MIDI soundtrack benefit greatly from the use of sample playback in place of the legacy Game Boy PSG channels, and unlike the first game, calling the pause menu does not cause the music to restart from the beginning. Player weapon sounds may still cut off when the mixing limit is reached from playing too many sound effects at once, but this only happens on very rare occasions. Unlike Doom for GBA, Doom II implements sound propagation, meaning that monsters can react to gun sounds.

Like its predecessor, Doom II for the Game Boy Advance is heavily censored in order to obtain a "Teen" rating from the ESRB, as the first party console manufacturer Nintendo discouraged creation of mature-rated games for the platform, focusing its marketing heavily on the tween demographic. As a result, monster blood is green instead of red, and most instances of extreme gore, such as gibs, were removed. Additionally, if the player is damaged, a bullet puff is produced instead of a blood splatter. The status bar face is also altered so that the blood is brown instead of red. Strangely, the super shotgun's shells have also been recolored, even though they did not depict blood or gore.

The color palette used is not identical to the color palette used in the original Doom games, resulting in some objects or surfaces suffering from palettization issues, especially under certain lighting/colormap conditions (such as being under the influence of a Berserk Pack). Browns and tans seem most affected. The pain elemental displays this more noticeably than other examples; its body appears slightly splotchy even under "normal" lighting. The first "episode" skymap also illustrates this.

Due primarily to the pervasive darkness of the first generation Game Boy Advance's display, the graphics are significantly brighter than their PC counterparts. This can be countered to a degree by turning the gamma option to the lowest setting, which best fits later backlit screens.

Most maps are modified to some degree, mostly to control the amount of geometry visible from certain locations. Examples include extra walls added in MAP03: The Gantlet and MAP06: The Crusher which block lines of sight across large areas. In addition, the maps are based on their v1.666 builds as opposed to the v1.9 IWAD versions - for example, silver bars are still present on the left cubby hole near the red key in MAP02: Underhalls, and an extra platform added later to MAP11: 'O' of Destruction to make the jump into the final area easier is not present.

MAP15: Industrial Zone and MAP24: The Chasm are both split into two maps each to avoid slowdowns and memory constraints. However, the scoring on these maps was not adjusted to reflect the removal of the enemies, secrets, or items relocated to the corresponding "second" map, making a score of 100%/100%/100% on these levels impossible. As the levels are divided in half physically, this appears to be based on a hard-coded scoring exception for these maps.

The Wolfenstein secret maps and Wolfenstein SS enemy are present, but all Nazi imagery and Hitler paintings have been replaced by iconography from Return to Castle Wolfenstein, presumably to avoid having the game confiscated in Germany and other jurisdictions with restrictions on depictions of Nazi and fascist symbols.

Enemies are drawn slightly larger relative to the environment than in other versions of the game; however, their bounding boxes are not scaled to the same degree. This makes shots tend to "miss" when they should appear to hit, if the shot was aimed at the periphery of a monster's visual representation.

The player is now allowed to walk underneath flying enemies, or jump on the heads of monsters below - this was possible in Doom engine games such as Heretic and Hexen, but was not allowed in vanilla Doom. Likewise, melee attacks from adjacent monsters will not affect the player when there is a large enough vertical distance. Monster corpses will obstruct the motion of a door, causing it to reverse if it tries to close on a corpse (as opposed to crushing or destroying the corpse). Since monster corpses disappear after a few seconds, this is only a temporary issue. Arch-viles are still able to revive monsters whose corpses have disappeared. Furthermore, Monsters are not able to open doors in this version, and may keep attacking a killed player.

Enemy AI will shut off at times, presumably to reduce slowdown due to heavy processing. The decision by the engine to shut off any given enemy's AI seems to be based upon a combination of distance and/or number of sectors between the monster and the player, and not based exclusively (if at all) on whether or not the player is within line of sight. Such a monster can sometimes even be shot and damaged by the player and remain "dormant" (an example is the Imps across the water in the first outdoor area in The Gantlet); this aspect can drastically reduce the difficulty of fighting stronger monsters in large areas later in the game.

Enemies killed by traps or friendly fire from monster infighting are erroneously not counted towards the "kills" tally at the end of the map. Only monsters killed directly by the player appear to be counted.

The music tracks "Between Levels" (MAP04) and "Getting too tense" (MAP28) were dropped, possibly due to cart space. They were replaced with "Into Sandy's City" and "Evil Incarnate", the music to MAP09 and MAP31, respectively.

The armors system in this game is somewhat broken; armor only provides protection in the map it was collected in, even though the numerical value of the armor carries over from one map to another. If the player enters a map with any armor percentage above 0%, the game will ignore the player's armor value, causing the player to suffer full damage from attacks. This happens until an item which affects armor value is picked up (either armor, megaarmor, a megasphere, or an armor bonus will work); this will "reboot" the armor system to properly protect the player again. If such an item is unavailable (or if the player can't collect the item because their current armor value is higher than what the item offers), then the player is, for all intents and purposes, forced to play with no armor, even if the player's actual armor value indicates the player should be protected. This was confirmed as a bug by publisher Activision.

The status bar features a single purple pixel underneath the total ammo tally.

The game may lock up on rare, seemingly random occasions, particularily in larger levels.

The cover art for this version of the game is a combination of the original Doom II box art with the standard Game Boy Advance packaging template. Regional variations exist for the United Kingdom and Germany, but these differ only in certain color shades and in the language used for text. The reverse box art uses an orange version of the same circuit board pattern used on the previous GBA release of Doom, along with the same black tab folder motif for the informational text and screenshots area.

The game cartridge label for all regions consists of the familiar Doom II logo on the same orange circuit board pattern. This time, all regions keep the logo centered and differ only minimally via addition of region-specific certification logos.

As with virtually all Game Boy Advance games, the instruction manual adapts the same appearance as the box art.

Like the previous installment, this game was not released in Japan.