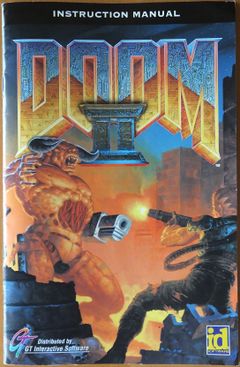 Cover of the manual.

The Doom II instruction manual is a 23-page full-color booklet written, printed, and distributed by GT Interactive in the US, Virgin Interactive in the UK, and other companies elsewhere, along with commercial copies of Doom II. Later versions of the manual exist for other versions of the game, including Doom95, as well as several special editions included with various compilation releases. This article is about the original edition.

The front cover consists of the Doom II cover art created by Gerald Brom. The then-current logos for GT Interactive and id Software are below at the bottom left and right respectively. The phrase "INSTRUCTION MANUAL" can be found at the very top above the logo. The inside of the front cover contains an epilepsy warning and disclaimer.

The front cover inlay, which is not enumerated as a page of the booklet, contains a table of contents, anti-piracy notice, and directs players to page 17 for information on setting up and playing multiplayer games. Requests for technical information are directed to the distributor for the region to which the instruction manual belongs.

The first page of the manual is titled, "The Story Continues...DOOM II: Hell on Earth," and recounts the tale of the marine fighting "in space", returning home on well-earned leave after stopping the invasion at the UAC Mars bases. Claiming that you have quit the military and are heading home, you instead find that Earth has been invaded as well. You join up with a team of marines to try to retake Earth's spaceport, which has been surrounded with a "flame barrier" by the demons, preventing any ships from taking off. Though the marines fight bravely, they eventually all fall in battle, except for you, leaving you once again to go it alone.

Page 2 details the "Object of the Game," explaining the basic premise of Doom II as a three-dimensional first-person shooter and its shoot-everything-that-moves and kill-or-be-killed design mentalities. It also begins the section titled, "Using the Doom Menu", It explains that the game will start up in demo mode, and then details how to open the menus and what each item in the menu does. Special attention is provided to starting a new game, saving and loading, and, continuing on to page 3, details on quitting or ending the game, toggling messages and graphic detail, setting the screen size, changing sound volume and mouse sensitivity, and adjusting gamma correction.

The fourth page is entitled "On-Screen Information", and explains and illustrates details of the status bar, automap, and HUD. "Controlling the Action" begins on page 5, and explains the default setup of the keyboard, mouse, and joystick, though the joystick instructions assume the Gravis PC Gamepad is in use, and do not go into detail about how the controls can be customized. Continuing onto page 6, information is given about picking up items, using doors and keys, lifts, finding secrets behind hidden doors, and what to expect from teleporters.

"Firepower and How to Use It" is the topic of the seventh page. Each weapon in the game is illustrated and explained, followed by information on how to aim and shoot, and the types and qualities of the various ammo objects are also shown and detailed. How to toggle between the shotgun and super shotgun is specially pointed out.

Page 8 explains the various commands available via function and other keyboard keys and is entitled "Commands and Shortcuts." It also recaps information on general controls that was provided previously in other sections.

Page nine is entitled "Dangerous Doom Environment," and explains environmental hazards. The exploding barrel is paid special attention, nukage and other forms of slime get a section of their own, and the existence of crushing ceilings is revealed.

Page 10 begins the "Health and Armor" section, continuing onto page 11, which explains medikits and stimpacks and the basic types of armor in the game.

Pages 10 through 12 also explain two classes of collectable items which id refers to as power-ups and artifacts, respectively. Included in the former group are items created by the UAC or military, including the radiation suit, berserk pack, computer map, and light amplification visor. Items of an otherworldly origin fall into the latter category, and include the health potion, spiritual armor, soul sphere, megasphere, blur artifact, and invulnerability artifact.

Page 12 also begins the section entitled "The Enemy", and shows a frame of animation alongside descriptive flavor text for each of the monsters in the game, in the following order, by name given in the manual:

Unlike in the earlier manual for Doom, the presence and appearance of the cyberdemon and spiderdemon are mentioned, since it is assumed that most players probably already encountered them in the previous game.

Pages 15 and 16 contain an installation guide.

Pages 17 and 18 contain information on how to setup and play multiplayer games, details which were only found in accompanying text files for the previous game. The trouble shooting section begins on page 19.

The remainder of page 19 continuing through to page 22 comprise a trouble shooting FAQ.

Special thanks are given to the following contractors:

The back cover of the manual has a color gradient from black to red overlaid with the Doom II logo. Copies of the GT Interactive and id Software logos are near the bottom, and are followed by a copyright notice with year 1994, and a license notice for GT Interactive and any additional distributors involved per region.