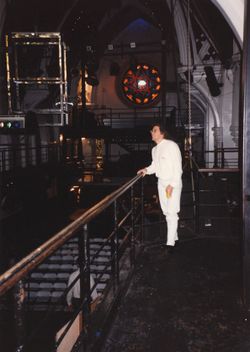 John Romero inside The Limelight before the party.

The Doom II release party, also called the Doomsday party,[1] was an event held at The Limelight night club in New York City on October 10, 1994, the official release date of Doom II (though the game had become generally available as of September 30). Invitations were open to a limited number of adult members of the public from September 23 until September 28 at midnight.[2] The event was id Software's first official release party.[3]

According to David Kushner in Masters of Doom, the party was setup by TSI Communications, a contractor hired by GT Interactive. Using a sizeable portion of the game's $2 million marketing budget, they transformed the night club into a gothic, Hellish house of horrors.[1]:146 A holographic projector was setup near the entrance to project pictures of Doom II's monsters into the fog, and the game's soundtrack was kept blaring through the club's sound system.[1]:146-147

The event included a Doom II deathmatch tournament, with four-player matches in the Deathmatch 2.0 game mode.[2] Awards were given, including a series of golden medals, one of which is in the possession of journalist Jeff Kitts.[4]