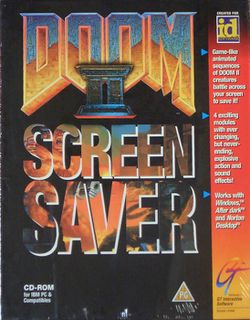 The Doom II screen saver is an officially licensed product created by GT Interactive for id Software. It consists of a Windows 3.1 and up 16-bit screen saver with four different modes: Skeet, Firework, Barrel, and Duel.

An arch-vile at the bottom left corner of the screen waits for monsters to march in from the right. It launches the monster into the air with its flame attack, while the Doomguy raises either the shotgun or chaingun at random from the bottom of the screen to take a potshot at the monster. Occasionally the Doomguy misses, leaving the desktop gradually more and more riddled with bullet and buckshot holes.

Monsters and marines randomly ascend from the bottom of the screen and explode into more copies of the same monster, with accompanying highly repetitive "ooh" and "ahh" sounds emanating from an unseen crowd.

The desktop is randomly littered with explosive barrels, which the Doomguy attempts to shoot in time to kill the monsters, who sometimes escape unscathed. During this mode, other random events also occur, such as a flock of lost souls crossing the screen, Doom marines pressing switches which drop them into holes or mysteriously cause them to gib, and monsters emerging from portions of the desktop which open up and then close like doors.

Two random monsters emerge and do battle across the desktop. The pairings often result in unlikely victories, such as a shotgun guy defeating a revenant. Nothing ever seems to beat the almighty cyberdemon, however.

Note that the program will not install on Windows XP or higher due to bugs in the installer program. It also cannot be installed or executed on 64-bit editions of Windows, due to being a 16-bit process. The program is also dependent on the speed of the CPU, and will run unreasonably fast even on relatively old processors such as a Pentium II.

The contents of the disks are as follows: