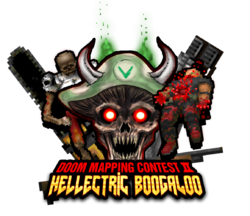 Logo for the Hellectric Boogaloo contest.

The Doom Mapping Contest II: Hellectric Boogaloo, in 2018, was the second event organized by Joel "Vargskelethor" Johannson of Vinesauce, the followup to Vine Mapping Contest 2016. The rules were to make a single map, for GZDoom, and to not use any copyrighted MP3 music that could cause DMCA issues when streamed. Volunteers would help reject entries that did not follow these rules, but the contest was still even more successful than its previous iteration, and it took over a year to stream through all of them.