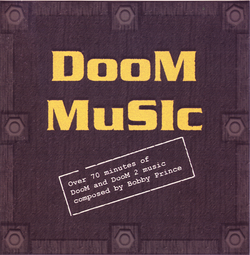 Cover of the Doom Music album by Bobby Prince

Photo of the Doom Music CD and inlay

On May 1, 1997 Robert Prince released Doom Music, an album with various remixed versions of a selection of music tracks from Doom and Doom II. The CD contain 20 tracks with a running time of 71 minutes 28 seconds. According to the text on the back, the tracks are arranged to fit for playing with Quake.

The remixed version of "At Doom's Gate" contains various sounds from Doom, i.e. weapon sounds, monsters roaring and death sounds, including some sounds from Doom II. The track "Donna to the Rescue" is extended, the version heard in-game corresponding only to the second half of the CD song[1].