Doom Must Fall (dmf-sp.wad) is a single-level total conversion, originally designed by Mackey "Avatar" McCandlish and released in 1995 as part of a deathmatch episode, in which it was also known as Kreissack's Fortress. It was extracted and restructured for source ports in 2000 by Sparky of KISS Software. It includes a DeHackEd file (dmf-sp.deh) which modifies most of the enemies and weapons. 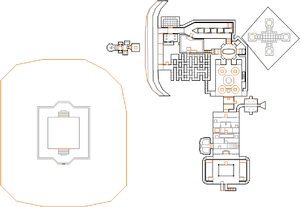 Map of Doom Must Fall
Letters in italics refer to marked spots on the map. Sector numbers in boldface are secrets which count toward the end-of-level tally.

On easy and medium skills it may not be possible to obtain 100% items as there are some health bonuses near the start that it is possible to destroy by shooting before picking them up.

On medium and hard skills there is a lost soul (thing 73) that is on a ledge that is too high for it to be alerted or shot at, thus making 100% kills impossible on these skills.

* The vertex count without the effect of node building is 1532.