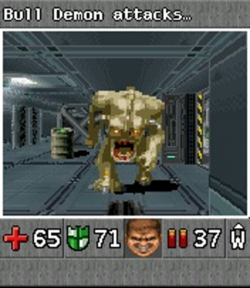 Many features of the original are retained, including the status bar face, sound effects and the majority of the weapons and monsters. Notably absent are the chainsaw, fist, arachnotrons, shotgunners and the Spider Mastermind. A difference from the original is that each monster type includes three similar monsters of varying difficulty, which are each coloured to indicate this. For example, in addition to regular cacodemons, the player will have to fight recoloured cacodemons called "malwraths" and "the wretched".

The BREW port of the game, released for CDMA mobile phones with more powerful processors and additional memory, added a few new features across two different revisions of the game:

The BREW 2.1 revision of the game (sometimes referred to as a "high-quality" version) added the following features:

Games based on the Doom RPG engine[edit]

Following the release of Doom RPG, four more games were released using its engine: Orcs & Elves, Orcs & Elves II, Wolfenstein RPG, and Doom II RPG, in that order. The J2ME version of the engine had new features added with every game.