Doom Raider: Crypt of the Vile

Doom Raider: Crypt of the Vile is a single-level mod by Russell Pearson. As part of their 10 Years of Doom feature, Doomworld named it one of the ten best mods of 2003. Mike Watson (Cyb), in his review, called it an excellent early example of ZDoom's engine enhancements.

The map has a fantasy adventure theme with intensive puzzle platforming, inspired by films such as the Indiana Jones series. It includes new weapons and a large number of replacement textures and graphics, which are credited to others: Sock, Stuart Godbolt, and Raven Software. In fact, Pearson states (slightly tongue in cheek) that he is not a Tomb Raider fan, but was spurred to create the level when he saw Sock's textures.

In 2020, Pearson released a reimagining of the level, titled Doom Raider 2020, for GZDoom. 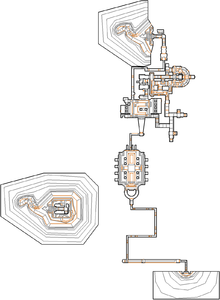 Map of Doom Raider: Crypt of the Vile
Letters in italics refer to marked spots on the map. Sector, thing, and linedef numbers in boldface are secrets which count toward the end-of-level tally.

* The vertex count without the effect of node building is 3385.

Doom Raider's idgames upload was marked as the "lite version", citing omitted mp3s due to file size concerns. A "full version" was released two days later with the mp3s present, plus a couple of gameplay tweaks. ZDoom version 2.0.47i or later is required.