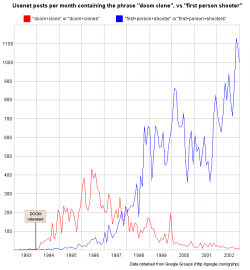 As evinced by counting their frequency on Usenet, "Doom clone" was a more common term than "first-person shooter" until the late 1990s.

Among games often counted as Doom clones are those based on the Doom engine, such as Heretic and Hexen (see Commercial games for more). Others include Rise of the Triad, Dark Forces, The Marathon Trilogy and Duke Nukem 3D.