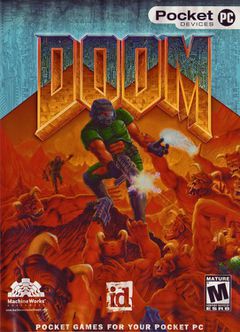 Although the IWAD for The Ultimate Doom is included, only the original three episodes are playable. All cheats from the DOS version work, but the level select cheat does not work for the fourth episode Thy Flesh Consumed. This port does not play any music, though the music volume setting is still shown in the options. There is no support for multiplayer games or for loading WAD files.

This port was later re-released as a digital download for ARM devices as "Doom PDA," targeting Windows Mobile 5.0. At that time, developer MachineWorks Northwest unsuccessfully pressured the authors of several free and open source ports for Windows Mobile devices in an attempt to make them cease distribution. This action raised the ire of many Pocket PC gaming enthusiasts.[1]

Due to a broken digital restrictions management scheme, the game must be installed to the default path, even though the setup asks if the user wants to install it elsewhere. If it is not installed to the default path, a misleading error message pops up, stating "Serial Numbers Don't Match!" As this prevents installation of the game onto SD cards, this creates major issues on 32 MB or smaller devices, as the game is a total of 26 MB in size - all effectively available space on the device will be used up by the game.

Another issue with this scheme is that, after a device restore via ActiveSync or Windows Mobile Device Center, the device must be reset immediately; otherwise, the game will not start, and the same misleading error message pops up instead. 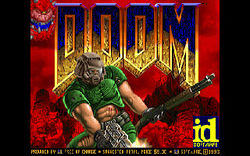 The IWAD provided for use by Doom for PocketPC is called doom1.wad and is actually a PWAD created using WinTex. Some of the graphic lumps have been modified to have vertical black bars with the image squashed horizontally in order to preserve proper aspect ratio. It is 14,445,632 bytes in size with 2,305 entries, one entry less than the Ultimate Doom WAD. It is missing the lump M_EPI4. It has the following hashes: