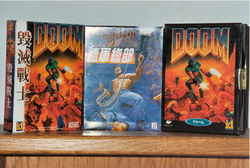 The Chinese software market in the early 1990s was almost impenetrable for western developers due to the prevailing economic conditions, barriers in trade and language, and the rampant nature of software piracy in the region. id Software however took the initiative to license Doom to several of the largest Chinese and Taiwanese game distribution and development companies, regardless of the nature of their prior activities, at a fee of US $1 per copy. This allowed id to turn a minimal profit from East Asian sales where most companies were making nothing, while in turn benefiting several of the companies involved by legitimizing their businesses, allowing them to attract further such projects in the future.[1]

In Chinese, games in the Doom series, as well as their protagonists, are consistently referred to by a name which can be variously translated as Extermination Warrior, Destruction Soldier, and similar phrases. Its various forms in the language appear as follows:

Use of this phrase for referring to the game series in Chinese is common enough that "Doom" has become the suggested translation of these words by services such as Google Translate, despite the lack of any correspondence in literal meaning.

Kingformation Co., Ltd. (精訊資訊) was the leading game developer in Taiwan at the time of Doom's release and was one of the companies approached by id Software. The project became one of their first authorized ports, with their earlier efforts having gone into unlicensed works such as translations of the Dragon Quest series (known as Dragon Fighter in Taiwan). They were later also extended publishing rights for Doom II, Duke Nukem 3D, and several other western titles. The version of Doom pictured above is one released by this company. A copy is known to be held by id Software, and is on public display in a glass case containing the majority of the company's releases and awards.

The edition of Doom published by Kingformation came on five 5.25" floppy disks, and included a fully translated version of the instruction manual, a poster featuring the Chinese box art, and an exclusive 80-page illustrated strategy guide and walkthrough for the game entitled "Doom 攻略手册" (Doom Hintbook). 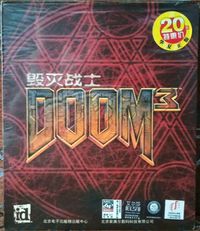 A Chinese-language edition of Doom 3.

Other titles, such as Doom 3, have also seen Chinese-language releases.

As in many western nations, Doom was not met without some controversy in China. According to David Kushner in Masters of Doom, the mainland Chinese government considered banning the game in 1994, citing its gore and violence.[2]