In addition to the officially licensed spin-offs, the popularity of Doom has resulted in a large number of homages in other media. 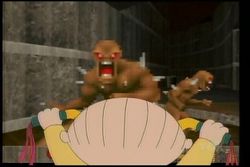 Dark Nebula
The song "My Domain" on the Dark Nebula album Dreamfuel features samples of various speeches from Doom.
Epiclore
Power metal band Epiclore has a song on its third album Grace Upon a Realm called "Knee-Deep In Doom", which is a medley of various Doom and Doom II songs and sound effects. The item respawn sound is sampled at half-speed, which is most likely due to the file having a higher bitrate than the rest of the sound effects in the game, and the program the band used did not compensate for this. The song can be downloaded freely off Epiclore's website.
Hexen
Thrash metal band Hexen has a song called "Knee Deep In The Dead" on their 2008 album State of Insurgency, which basically tells the story of the first Doom game.
Lemon Demon
The song "Bad Idea" samples death sounds of zombies and demons, teleportation, the rocket launcher, and the super shotgun.
Lollipop Lust Kill
The band Lollipop Lust Kill wrote a song titled "Knee Deep in the Dead" paying homage to the game.
Manny Charlton
Manny Charlton, the guitarist of Nazareth, sent an untitled song on a cassette tape to id Software in 1995. John Romero would later call the song "Blood On the Walls" despite Doom being written all over the case. The liner said "For all the guys and gals at I.D. who came up with the coolest game this side of hell, kick some demon butt to this!!" and also said to "distribute as shareware".
MC Frontalot
In MC Frontalot's 2005 "Nerdcore Rising," rapper Jesse Dangerously says, "I made my own Doom .wads, dickwad. My own sprites and .mus files. I stayed home nights..."
MC Lars
Post-punk laptop rapper MC Lars mentions Doom in "O.G. Original Gamer," the tenth track of his 2009 album, This Gigantic Robot Kills. The official video for the song also includes a brief sequence of game play in which a zombieman is killed with the shotgun on E1M2: Nuclear Plant.
Rammstein
The song "Wollt ihr das Bett in Flammen sehen?" (English: "Do you want to see the bed in flames?") by Rammstein samples the Doomguy's dying scream and shotgun reloading sounds.
Rotten Sound
Finnish grindcore band Rotten Sound's album Murderworks has a song called "Doom", which samples shotgun firing sounds as well as several imp and zombie sounds.
The Smashing Pumpkins
The Smashing Pumpkins credit id Software for the Doom explosion sound effect which is used as a sample on the song "Where Boys Fear to Tread" off the album Mellon Collie and the Infinite Sadness. This sound effect points to the relationship between Doom and The Smashing Pumpkins in the SPISPOPD joke.
Unter Null
The Unter Null song "Bloodlust", first track on the album The Failure Epiphany, uses a sample of DSBOSSIT from 1:24 to 1:29.
Warbringer
Thrash metal band Warbringer has a song called "Hell On Earth" on their 2008 album War Without An End which makes explicit references to Doom, including use of the phrases "knee deep in the dead," "barons of hell," and describes fighting with zombified humans and demons inside mazes with shotguns.