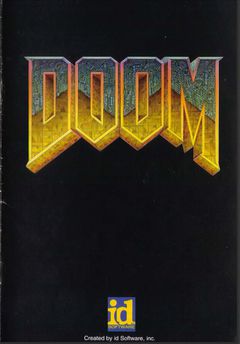 Cover of the manual.

The Doom instruction manual is a thirteen-page full-color booklet written, printed, and distributed exclusively by id Software to those who registered the shareware version of the original Doom, along with the floppy disks containing the game. Later versions of the manual exist for other versions of the game and its sequel, Doom II, as well as several special editions included with various compilation releases. This article is about the original edition.

The front cover consists of a crop of the familiar Doom logo from the cover art created by Don Ivan Punchatz on a black background. The then current logo for id Software is below at the bottom center, and the wording "Created by id Software, Inc." is below it.

The front cover inlay, which is not enumerated as a page of the booklet, contains a table of contents, anti-piracy notice, and directs players to the text files included with the game for information on setting up and playing multiplayer games and for troubleshooting information; this information is not duplicated in the manual itself.

The first page of the manual is titled, "The Story So Far," and recounts the tale of the marine's deportation to Mars and the subsequent invasion of the base by the forces of Hell.

Page 2 includes information on how to install the game in DOS using the provided floppy disks, and details the "Object of the Game," explaining the basic premise of Doom as a three-dimensional first-person shooter and its shoot-everything-that-moves and kill-or-be-killed design mentalities.

The third page is entitled "Using the Doom Menu." It explains that the game will start up in demo mode, and then details how to open the menus and what each item in the menu does. Special attention is provided to starting a new game, saving and loading, and, continuing on to page 4, details on the "Read This!" item, quitting or ending the game, toggling messages and graphic detail, setting the screen size, and changing sound volume and mouse sensitivity.

Page 6 is called "Controlling the Action" and explains the default setup of the keyboard, mouse, and joystick, though the joystick instructions assume the Gravis PC Gamepad is in use, and do not go into detail about how the controls can be customized. Continuing onto page 7, information is given about picking up items, using doors and keys, lifts, finding secrets behind hidden doors, and what to expect from teleporters.

"Firepower and How to Use It" is the topic of the eighth page. Each weapon in the game is illustrated and explained, followed by information on how to aim and shoot, and the types and qualities of the various ammo objects are also shown and detailed.

Page 9 explains the various commands available via function and other keyboard keys and is entitled "Commands and Shortcuts." It also recaps information on general controls that was provided previously in other sections.

Page 10 is entitled "Dangerous Doom Environment," and explains environmental hazards. The exploding barrel is paid special attention, nukage and other forms of slime get a section of their own, and the existence of crushing ceilings is revealed. This page also begins the "Health and Armor" section, continuing onto page 11, which explains medikits and stimpacks and the basic types of armor in the game.

Pages 11 and 12 together explain two classes of collectable items which id refers to as power-ups and artifacts, respectively. Included in the former group are items created by the UAC or military, including the radiation suit, berserk pack, computer map, and light amplification visor. Items of an otherworldly origin fall into the latter category, and include the health potion, spiritual armor, soul sphere, blur artifact, and invulnerability artifact.

Page 13, entitled "The Enemy", shows a frame of animation alongside descriptive flavor text for each of the monsters in the game, in the following order, by name given in the manual:

Unlike in the later manual for Doom II, the presence and appearance of the cyberdemon and spiderdemon are not mentioned, presumably to avoid spoilers.

The back cover of the manual is black like the front, and gives credits for id Software staff as follows:

Special thanks are given to the following contractors:

Another copy of the id Software logo is near bottom center, and is followed by a copyright notice with year 1993, and standard trademark disclaimers for IBM, Sound Blaster, AdLib, and Gravis PC Gamepad.

There exist several different printings of this manual. The one distributed by the Australian distributor Manaccom differs by using a black back cover (instead of the twisted skulls motif), a misspelling in Paul Radek's name (as "Paul Raydek"), and the mention of Maurice Hale for testing and technical support alongside Shawn Green instead of American McGee. In another variant, Shawn Green's colleague is listed as being David Osborn.