Doom 0.3 was an alpha version of Doom built by id Software on February 28, 1993. Though apparently never released to id's alpha testers, this build was sent to several industry professionals for comment and review, and as a result it only resurfaced at a much later time compared to the other alphas. It was uploaded by James Haley (Quasar) to the idgames archive on August 3, 2015. Notable features include several maps in their earliest known forms and a fully functional on-screen automap. It much more fully displays the Doom engine in its earliest state than the tech demo, with an internal architecture significantly different and less advanced than later builds. Crashes are common, especially when walking over two-sided lines. The README file promises a more proper release to follow in two weeks, but such a release is not presently known to exist. 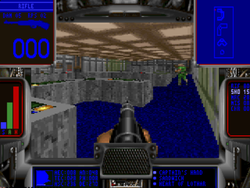 THESTORE, an inaccessible level in the 0.3 alpha.

Version 0.3 includes features that were also in 0.4, but certain things are not implemented or would later change in function.

Keys used in the alpha that are not related to player movement include: 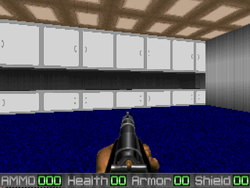 The levels in version 0.3 are the closest surviving iterations to the plans originally laid out by Tom Hall in the Doom Bible. Most of the levels still display an absence of major variation in floor and ceiling heights, and often the walls are angled at 90°. John Romero's Nuclear Plant is a notable exception, already exhibiting the experimental design characteristics which eventually turned the rest of the team against the idea of hyper-realistic level design as stated in Masters of Doom.[1] Here, differences from version 0.4 are noted:

Levels 4, 5, 6, 7 and 9 are copies of the placeholder spinning title map. Except for level 9, where you spawn in a corner with three other player starts, you spawn in the center.

There are several levels with non-standard header names contained in the IWAD which appear to be implementations of concepts from the Doom Bible, in particular areas which would attach to episode 1's Supply Depot Two (the only remains of which eventually became Containment Area) via the game's then-planned hub system. Currently known are the following:

The renderer is extremely raw, with numeric instability evident in the projection of walls, which wobble in a manner similar to the effect of long wall error but regardless of their length.

As mentioned above, it is is possible for the game to crash when the player's viewpoint passes directly above a two-sided linedef, frequently with the momentary display of garbage on screen, followed by an error message stating that a region of the frame buffer is not covered by any "rendersegs," a data structure which is not known to exist in the engine after v0.5.

When toggling between screen sizes and returning to the helmet view, the projection seems to pitch downward by a few degrees, in a manner similar to the y-shearing-based free look later independently added to the Doom engine by Heretic and Strife.

As in Wolfenstein 3D, it is possible to slide along walls that stand at 90° angles. However, attempting to do so on diagonally-angled walls produces jerky movement, as if the wall was composed of a series of tiny 90° blocks rather than a flat line.