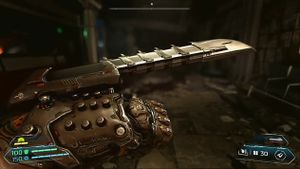 The Doom Slayer examines the Doomblade before entering the fray of battle, seen in pre-release footage.

The Doomblade is an arm-mounted retractable blade which the Doom Slayer carries in Doom Eternal, one of the two main enhancements made to his Praetor suit since Doom (2016). It attaches to his left gauntlet and can be extended with great force to impale enemies, usually through the skull. Aside from its sharp main point, backward-facing serrations along the left edge ensure that additional shredding damage is done as the blade is withdrawn from the enemy, and its blade is sharp enough to be used for decapitating demons. The Doomblade is used as an instrument for carrying out glory kills.

Hugo Martin stated that addition of the Doomblade to the game has allowed a wider range of glory kill animations than was possible in Doom (2016), and that it solves problems of scale between the player and the enemies which were common during its development.[1]