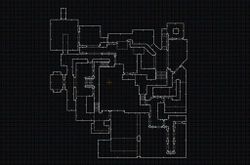 Doomjà Vu - It's never the same was a contest run by Daniel Gimmer (Tormentor667) and Realm 667 in 2015 between January 15th and March 31st. The aim was to take the simplified layout of E1M7: Computer Station and transform it into a completely new level. Tormentor667 planned prizes for the first five places, but there were only six contestants in total.