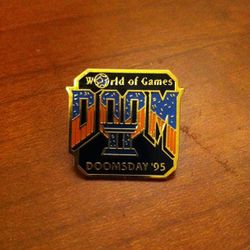 Doomsday '95 (also styled DoomsDay '95 and DooMsday '95), also known as the Doom II Swiss Championship, was a multiplayer Doom II competition and LAN party held at Don Camillo in Bern, Switzerland, on March 19, 1995. Lasting from 10:30 AM to 8:00 PM, 180 people were in attendence total.[1] It is retroactively considered the first NetGame Convention. It was sponsored by World of Games, a Swiss game store.

The like-named DoomsDay'95 map was created by François Coppex (Helioth) and André Christen to serve as an official battleground for the tournament.