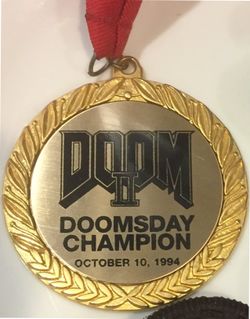 The Doomsday Champion medal was a series of custom-made medals given to the winners of a deathmatch tournament at the official release party of Doom II on October 10, 1994[1]. One of these medals was won by Jeff Kitts, who is now managing editor for Guitar World. Contemporary press articles indicate that this was one of a series, though the other winners are not currently known.[2]