Doomsday of UAC (commonly known by its filename UAC_DEAD) is a single-level PWAD designed by Leo Martin Lim. As part of their 10 Years of Doom feature, Doomworld named it one of the ten best WADs of 1994.

One of the first ever fan-made Doom mods, UAC_DEAD features an attempt at creating realistic-looking vehicles and environments. It contains a replacement sky graphic, and uses careful flat and texture choices in places to simulate colored lighting. It also includes the first known instance of the self-referencing sectors trick, used to create both invisible stairs and an invisible chamber enclosing a cyberdemon.

UAC_DEAD was originally released June 23, 1994. It also appeared on Maximum Doom as UAC_DEAD.WAD, as UAC_DEA2.WAD, and as E1M4 of DEATHM2.WAD.

Doomsday of UAC was featured in Doomworld's Top 100 Most Memorable Maps, placing 10th. 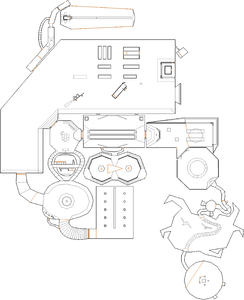 Map of Doomsday of UAC
Letters in italics refer to marked spots on the map. Sector, thing, and linedef numbers in boldface are secrets which count toward the end-of-level tally.

Make a 180 degree turn, lower wall, go inside the building in front of you, open its door, open the sign behind it, take blue key. Get back outside, open the doors on the corner of the silver building, go down the halls, go to the left side of the 3D UAC letters, take yellow key behind the furthest pillar on the right side. Backtrack to the silver building, go to the highest floor, open blue door and the yellow door behind it, go right, push switch, go through the door near it that it opened, kill the baron of Hell, push the switch behind the counter, go through the screens it lowered, go beneath the red torches, then beneath the candles, approach the top, go through the opening, approach the idle cyberdemon, kill the two barons of Hell, kill the cyberdemon, take the red key. Backtrack to the wall that locked you in the red caves, to the right of it there are red sunken bricks, open them and push the switch behind them, then keep backtracking to the spawn, open red door, shoot the barrels to the left, go through the "crack" they've made, shoot "off" the furthest dirt tile, go left, open door, then the door to the right, lower one of the UAC logos and push the screens on the front.

* The vertex count without the effect of node building is 2113.

This map occupied the E1M8 slot in order to use the special tag 666 twice, exploiting a peculiarity of Doom's handling when more than one type of boss monster is present in the map. This peculiarity was changed in Ultimate Doom, and as the Doom source release inherited the change, the map is unplayable in many modern source ports due to the red key being unobtainable. Chocolate Doom, Doomsday and PrBoom have option settings which allow the trick to operate as intended, and ZDoom and GZDoom identify the level through its checksum and automatically apply the correct compatibility flag.

The sky texture in this level is taken from Josh Fallon's Nightfall (NIGHTFAL.WAD).