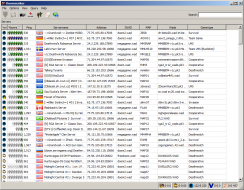 Doomseeker is an open source server browser for client/server source ports, available for Windows, Linux and MacOS X. It supports Zandronum, Odamex, ZDaemon, Vavoom and Chocolate Doom through individual plugins. The project is developed by Braden "Blzut3" Obrzut and Zalewa.

As of the 01-17-2016 development build, Doomseeker added support to Sonic Robo Blast 2, a fan game built using a modified version of the Doom Legacy source port.

Doomseeker originally started in March 2009 as an official replacement for the IDESE browser included with Skulltag at the time. The primary motivation for this was Skulltag's expansion on to platforms other than Windows, and the Skulltag team sought a consistent user experience between platforms. As such, Skulltag was originally the only port supported by the browser, but starting with version 0.2 a plug-in architecture was introduced along with support for Odamex. More plug-ins were added at a later time.

In May 2011 Doomseeker moved to DRD Team in order to become more independent from Skulltag. The move was, in part, to break free from any misconceptions due to Skulltag being closed source.

Wadseeker is a library which implements automatic mod downloading similar to GetWAD.