Doomworld Forums 3 is a two-level PWAD for Doom II requiring the ZDoom source port that was created by Anonymous. The first map is a "short graphical novella" while the second level is playable. It received the Mockaward for best comedy wad at the 2004 Cacowards. 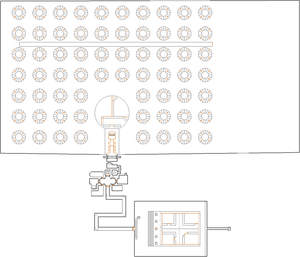 Map of Doomworld Forums 3 MAP02
Letters in italics refer to marked spots on the map. Sector numbers in boldface are secrets which count toward the end-of-level tally.

* The vertex count without the effect of node building is 3772.