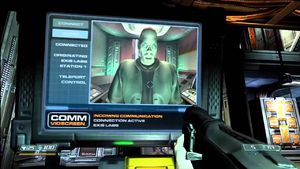 Dr. Richard Meyers is a central character in Doom 3 BFG Edition's new expansion, The Lost Mission. He was a scientist on Dr. Malcolm Betruger's teleportation research team who had been reassigned to the top secret, incomplete Exis Labs facility with instructions to bring the experimental bi-directional teleporter there online as quickly as possible.

After growing increasingly suspicious of Betruger's motivations, Meyers managed to hack into Betruger's personal files (possibly the source of some of the unknown hacks detected by Central Administration, Delta Complex, and CPU IT security teams during the main campaign). Amongst the files was Betruger's personal journal, in which was fully detailed his corruption by the demons via contact through his dreams, in which he was offered unlimited power in exchange for enabling the demons to reach Earth.

Now understanding Betruger's plot, and realizing that with enough power the Exis teleporter might enable the demons to teleport directly to Earth, Dr. Meyers plotted to destroy it by having EnPro staff route a massive power surge to the device to overload it. However, before this could be completed, Betruger, unable to wait any longer for completion of the Exis device due to the arrival of Elliot Swann, unleashed the invasion of the Mars base through the Delta teleporter. The Enpro staff were killed by demons and Dr. Meyers was left stranded alone in Exis, unable to complete the power re-route.

Once the lone survivor of Bravo Team reaches the Enpro Sector 1 control room, Meyers recruits him as an aide in finishing his task. After having the marine re-enable powered down machinery in Enpro Sector 2, allowing power to be rerouted, he instructs him to meet him at Exis. Later, once the marine reaches Exis and powers up the experimental teleporter, he has him go into Hell in order to activate the other half of the device. Once active, he is able to overload the device, destroying it for good.

After the Bravo Team squad member returns from Hell before the portal closes for good, both he and Dr. Meyers are rescued by a marine squad aboard the Darkstar, the same interplanetary shuttle which brought the hero of the main campaign to Mars. This suggests that both may have survived the invasion, despite the claim in Resurrection of Evil that only one survivor was found. This could be considered a retcon, or it could be taken that RoE simply meant only one survivor was found on the base itself - Meyers and the Bravo Team member having already left on the Darkstar.