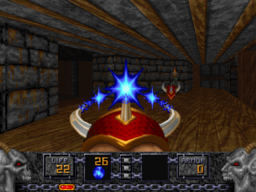 The Dragon Claw is a weapon in Heretic. It appears to be a glove made of a dragon's skin and claws, and takes Claw Orbs as ammo. The weapon appears first in E1M2: The Dungeons where it is obtainable via a secret area. Since it is the final one of the few weapons found in the shareware episode, it can be discovered on every later level as well, E1M4: The Guard Tower being the first map where the weapon lies in a non-secret area.

The Dragon Claw rapid-fires hitscan energy bolts. Each bolt deals 4-32 damage. Single shots have perfect accuracy while continued firing is less accurate. When enhanced by a Tome of Power, its firing rate is slower and each shot costs 5 orbs instead of just one, but when a shot hits something, it splits into a ring of eight projectile spiked balls that tear through enemies. The balls deal 0-1 damage every tic they are inside an Iron Lich, and 1-8 damage every tic they are inside any other enemy; this makes the weapon very effective against large groups of non-Lich enemies. This weapon is always effective on ghosts. It is also the most advanced weapon found in Heretic's first episode. Maximum capacity is 200 shots, or 400 with the Bag of Holding.

In non-powered mode, the Dragon Claw has a similar relationship to the Elven Wand as Doom's chaingun with the pistol, but there are a few notable differences. Each shot of the claw uses a different damage output formula from the wand, with lower lows and higher highs but dealing higher damage on average. Unlike the chaingun, single shots can be fired. Also, the wand and claw do not share an ammo pool with each other.

The unpowered Dragon Claw is good against creatures who are susceptible to stunlocking, serves as an excellent weapon for eliminating ghosts, and can be used to snipe enemies from afar by tapping the fire button. It is easy to tell whether the weapon is hitting targets because an impact on a target creates a larger blue splash compared to the blue sparkles of impacts on walls. Because it is a hitscan weapon, it can also be fired through solid decorative obstacles that would absorb projectiles, sometimes allowing the player to attack from behind cover.

In the IWADs the Dragon Claw is first encountered on these maps per skill level:

The IWADs contain the following numbers of Dragon Claws per skill level: