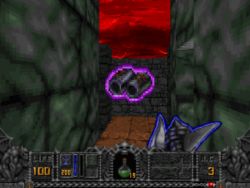 The Dragonskin Bracers as seen in Hub 1: Seven Portals.

The Dragonskin Bracers are a powerup in Hexen. They appear as a pair of silvery bracers with a purple glowing aura. Unlike the other armor items in Hexen, they may be carried for later use, and when used, grant the player an additional four points to their armor class. Multiple bracers can be used at once, but the player's enhanced armor class is capped at a maximum of four more than the character's fully armored AC without the bracers. This maximum is therefore 20 for the fighter, 18 for the cleric and 16 for the mage.

Internally, bracers work by adding one point of armor to each of the player's four armor pieces, so long as the player has not reached the absolute maximum armor level for their class. This uses an alternate routine for adding armor, shared by the fighter's Mystic Ambit Incant, and is therefore allowed to surpass the point limits of each individual piece, unlike collecting the armor pieces normally.

In the IWADs the dragonskin bracers are first encountered on these maps per skill level:

The IWADs contain the following numbers of pairs of dragonskin bracers per skill level: