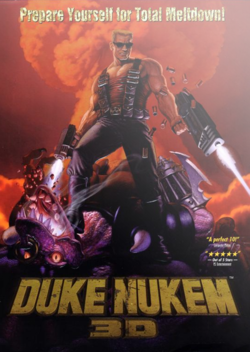 Duke Nukem 3D is a first-person shooter developed by 3D Realms and released by GT Interactive Software on January 29, 1996. It is a sequel to the platform games Duke Nukem and Duke Nukem II, published by 3D Realms. Along with an official expansion pack, known as Plutonium Pack, several third party expansion packs were also released. The game has been ported to several platforms, some of which include new levels and/or major changes in the gameplay.

The story features the protagonist Duke Nukem fighting against an alien race. Along with Wolfenstein 3D and Doom, Duke Nukem 3D is considered responsible for popularizing first-person shooters. It uses the same basic gameplay dynamic from Doom, although the atmosphere of the game is different: Duke Nukem 3D incorporates a fair amount of humor and sexuality mixed in with a variety of environments, ranging from realistic urban areas to space stations.

While Doom and Duke Nukem 3D feature similar technology, Duke Nukem 3D could in most respects be considered technically superior. The player can jump, crouch, and aim vertically. The rendering engine features slopes, overlapping and moving sectors, arbitrary scaling of textures and strong scripting capabilities. Most of the game behavior is stored in external script files which can be modified to change almost any feature of the game. The registered version of the game came with an editor, "Build", which included a 3D editor mode. 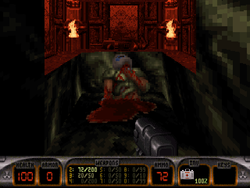