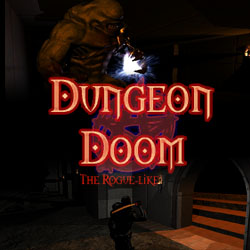 DungeonDoom is a Doom 3 mod made by Borderline Interactive [1]. It is unique for the blend of classic first-person shooter gameplay and strategic elements found in role-playing games or collectible card playing games. Reviews of DungeonDoom were published in various game magazines.[1] 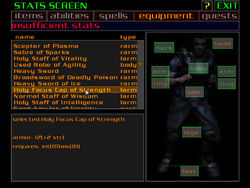 DungeonDoom incorporates extensive character development features which are not included in the original Doom 3 game. At the start of the game, the player can choose among five different character classes: The fighter, the supernatural, the psi-fighter, the cardmaster or the ninja.

The fighter character relies mostly on standard, classical first-person shooter gameplay. In contrast, the supernatural derives its power from magic, and the psi-fighter can use both standard and magical weapons to a limited extent. The cardmaster relies on a unique gameplay twist and derives its power from a magical card deck used in a way similar to collectible card games. Finally, the ninja relies on short range melee weapons and keyboard shortcuts (i.e. combos).

During gameplay, the character capabilities are constantly developed by learning or improving special abilities and spells based on gained experience and by purchasing new equipment. The player can also choose to act in a righteous or evil manner - with consequences to the further proceeding of the game. 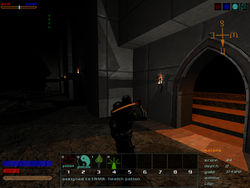 Randomly generated dungeon structures. More screenshots can be found here
A particular unique feature of DungeonDoom is its level of randomization. Unlike most contemporary mods, in which only the appearance of certain items or enemies is randomized, the entire level design is dynamically altered and randomized during the gameplay of DungeonDoom. 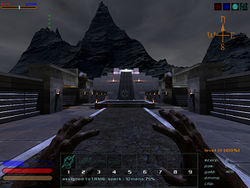 The first release (0.1) of DungeonDoom included only the core gameplay features: simple randomized dungeons and enemies, as well as rudimentary equipment purchase features. Since then, additional features were added to the modification by various contributors. The current version includes a widespread fantasy world which can be explored both above the ground in the "overworld" and in the dungeons. The player can take part in optional quests and the overall gameplay follows a simple story.