Dystopia 3: Re-Birth of Anarchy is an 11 level WAD supporting single player, cooperative, and deathmatch play. Released in 1996 and built by well-known mappers Anthony "Adelusion" Czerwonka and Iikka "Fingers" Keränen, it was one of the first WADs to exploit editing tricks discovered for the Doom engine, such as deep water and the famous double 3D bridge (see screenshot).

While its gameplay was true to Doom II's style, the project's level of detail was revolutionary for its time, with levels containing custom textures, crashed spaceships, and elaborate architecture in varied environments, subtly referring to a self-contained story. These elements have led many to claim it is one of the best Doom II WADs created, earning a spot on Doomworld's Top 100 Wads of All Time.

Adelusion and Fingers continued to work together on Doom projects, including Requiem, STRAIN, GothicDM, and SlaughterDM. Their work was heavily influential on the community, and raised the standards of judgement for WAD releases. 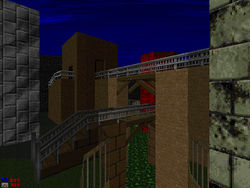