This level occupies the map slot E1M0. For other maps which occupy this slot, see Category:E1M0.

E1M0: Colossus Reloaded (M_VAD04.wad) is the tenth and secret map in episode The Remains of UAC of ZPack. It was designed by Björn Ostmann (Vader) and uses the music track "Bye-Bye American Pie" from Doom II, by Robert Prince. The par time defined in MAPINFO is 1:30. 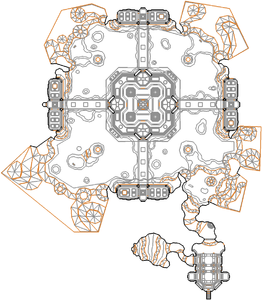 Map of Colossus Reloaded
Letters in italics refer to marked spots on the map. Sector, thing, and linedef numbers in boldface are secrets which count toward the end-of-level tally.

If you examine the eye inside Secret #2, a message will display, which ends up being random. You will get messages which actually are tips to other maps in the wad, specifically Vader's other levels, such as:

* The vertex count without the effect of node building is 6745.