This level occupies the map slot E1M10. For other maps which occupy this slot, see Category:E1M10.

It was originally a 1994 level, contained in the file SEWERS.WAD, intended for a nine-level episode replacement, and was designed by David Calvin, lead programmer of the Doom 3 port with Vicarious Visions, alongside David Blanshine. A bugfixed version, based on the original version, can be downloaded at ClassicDoom.com alongside the aforementioned original version; in both cases, the level is located on E3M1. The original version is also available on Maximum Doom as a stand-alone WAD, as well as on many other shovelware compilations. It has been available on the idgames archive as part of the 1994 compilations WADPAK2.WAD (as E3M7) and NEWDOOM.WAD (as E2M3), and as a stand-alone level since 2005. 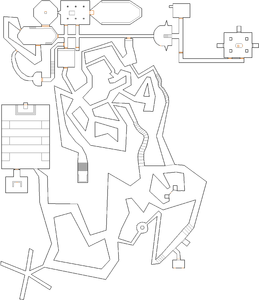 Map of Sewers
Letters in italics refer to marked spots on the map. Sector, thing, and linedef numbers in boldface are secrets which count toward the end-of-level tally.